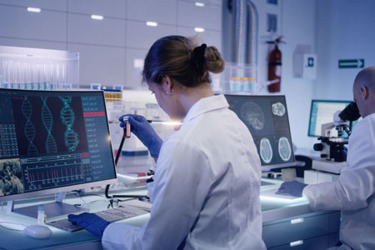 What the outsourcing world needs now is university-based, -affiliated, or -spun out CDMOs. I’ll take the liberty to dub them U-DMOs.

These emerging entities could serve as the antidote to the twin challenges plaguing biopharma organizations of all sizes, but particularly emerging, new-technology organizations: a lack of (1) skilled workers, and (2) capacity at CDMOs.

We’ve heard this string of thought from other professionals, but never as clearly as from Joanne Beck.

She’s been inching outsourcing forward for years, while at Amgen, Abbott/AbbVie, Shire, and Celgene, and since 2019 as COO at Boston Pharmaceuticals, a clinical-stage biopharma that acquires and advances a portfolio of drug candidates addressing unmet medical needs.

I’ve reported that established CDMOs have been turning away, timing out, and often turning off emerging biopharma customers.

Even when they have capacity, the facility may not be right-sized, outfitted for purpose, or staffed with scientists and engineers well versed in specific technologies.

There are some indications this is beginning to change, but challenges remain today for emerging or smaller biopharma organizations reliant on our drug development and manufacturing model.

“I’m close to people at some CDMOs facing delays,” Beck says. “Especially with the bigger CDMOs, they sometimes over-reach. Business development is way ahead of operations; they see opportunities to land more clients.”

“But their operations people are telling me, ‘We’re over-committed, and that means we have no room for error.’ I think it’s important to take into account things can and will go wrong, especially when dealing with new technologies.”

Unfortunately, unlike Beck, many readers may not have the historic connections to ascertain when BD and operations at CDMOs are on different planes. “And building these relationships is what you miss even more now, with not having being able to attend more meetings in person [due to COVID],” Beck says.

But when there is the opportunity to be face-to-face with CDMO operations folks, she says, “Privately they might apologize for a late delivery, and explain they are booked up with overly tight timelines.

“You also can gauge their experience and comfort level with a particular technology. You need these relationships to pressure-test how much real capacity and capability the CDMO has.

CDMO customers like Boston Pharmaceuticals, in turn, make promises to other partners, and more importantly to investigators, clinical trial participants, or patients, based on the assumptions from the CDMO.

“We want to ensure they have aggressive but also realistic plans in place.”

Where Have Workers Gone?

The second outsourcing challenge today is an industrywide dearth of skilled workers. Beck started experiencing this years ago when she set out with universities and community colleges to assist the industry in establishing biopharma training.

While at Celgene, she initiated discussions with the New Jersey Institute of Innovation (NJII). She tasked Mayo Pujols, who was heading up cell and gene therapy manufacturing at the time, to collaborate with NJII on developing training modules for production and quality control personnel.

“We reached out to start the whole training and talent development discussion. I mean, it was daunting trying to recruit experienced talent. There were no programs to either train recent college graduates or cross train our own staff,” Beck recalls.

“I thought, ‘How were we going to staff our cell therapy operations at Celgene?’ So we initiated that conversation.”

She also has worked with organizations such as the Biomanufacturing Education and Training Center (BETC) at Worcester Polytechnic Institute. (see: Are There Enough Biomanufacturing Workers In The U.S.?).

Kamal Rashid, director of BETC at the time, has now set up a similar center at Albany College of Pharmacy and Health Sciences (ACPHS). These and other university-based biomanufacturing centers offer hands-on training to students, and retraining for current biopharma workers, as well as offer CDMO services on a smaller scale.

And speaking of long stories made short, Pujols is now the CEO of Andelyn Biosciences, another new styled contract organization, this time an H-DMO, if you will, having been spun out of Nationwide Children’s Hospital (see: U.S. Manufacturing On The Rise: Add Another CDMO To The Heartland) to provide gene therapy services, including viral vector manufacture.

“So I know of at least two colleagues that transitioned from being leaders in the industry to becoming CEOs of CDMOs,” says Beck, “[Pujols], who worked at Celgene and then Novartis, and Ran Zheng [formerly of Orchard Therapeutics, where Beck is a board member], now CEO of Landmark Bio, spun out of Harvard and MIT.

“These new organizations fill a niche,” explains Beck. “Companies collaborate with them on low-volume, early-stage programs because there isn’t enough capacity elsewhere — particularly in cell and gene and new technology platforms.”

As important, says Beck, these new organizations have the business models and facilities to be “flexible, nimble, and experiment more with new platforms.”

The challenge now for U-DMOs (and other emerging service-provider iterations) is to focus on getting themselves established, but not biting off more work than they can chew — like their progenitors have.

“There’s always the tendency to get started with as much business as possible,” says Beck. “But I don’t believe they’re driven as much by generating profits like the larger, established CDMOs.”

“They absolutely need revenue, but the main goal is on driving the industry with new technologies and training the workforce. I hope they don’t feel the same pressure that others have felt from their business-development side.”

This editorial by Outsourced Pharma Chief Editor Louis Garguilo has been adapted from his original piece for Life Science Leader magazine.