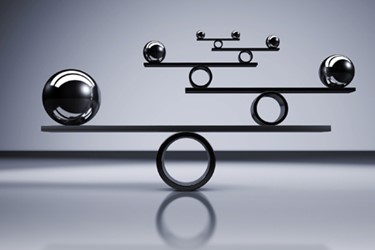 Biologics Dose And API Outsourcing: A Decade of Decline? is a recent editorial based on a (somewhat provocative) analysis of research provided exclusively to Outsourced Pharma by PharmSource, an organization of GlobalData Plc. The editorial’s headline identifies what among the data we found of most interest.

Now there’s a more narrowly focused report we can use as further market reference, “Sterile Injectable Drug Product Manufacturing Market Overview And Outlook,” prepared by Industry Standard Research (ISR). This report – actually a survey of industry participants – adds to the slowly evolving thesis that suggests, if not an overall decline, at least select pockets of our industry are reaching an “outsourcing saturation point.”

On the other hand, this second study also touches on another topic of our recent interest, an expected increase in the need for lyophilization services.

The PharmSource and ISR research utilize far different sets of data; that conveniently contributes to the veracity of the trends we are starting to identify.

We learned that in 2009, companies chose to outsource 75% of their innovative biologic API, but a decade later – in 2018 – that number had “shrunk to what at first blush appears an astonishingly diminutive 13%.” For biologic-dose outsourcing, the drop from 2009 to 2018 was from 75% to 43%. However, we should also consider that the overall pie (number of biologics to potentially be outsourced) is growing substantially, and should continue to for years to come.

Therefore, say the authors, “the data should not be interpreted as industry-wide outsourcing rates, but rather aggregate rates specific to the outsourcing community within the industry … These data give insight into the market dynamics from companies that outsource, how these companies select and perceive providers of sterile injectable manufacturing services, and their insight into current and upcoming trends.”

And that’s precisely what readers need to add another layer of understanding of what outsourcing competitors are up to.

ISR asked respondents (perhaps including some readers of Outsourced Pharma):

“Thinking specifically about the compounds/products with sterile injectable formulations (either in development or marketed), what percentage of the following activities is outsourced, and what percentage will be outsourced in 5 years?”

Here’s how the responses charted out: 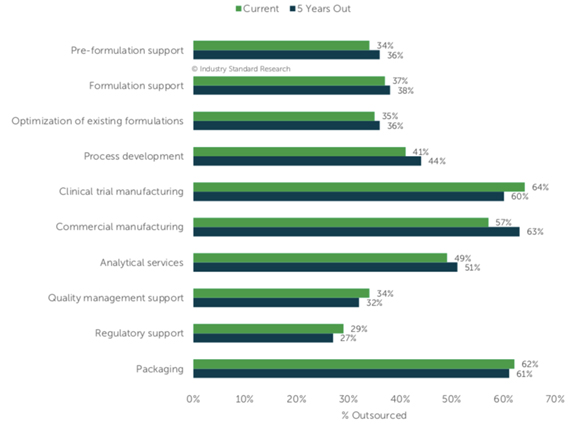 As I tend to with reports, I’m drawn to potential data points that seem to flow against current sentiments. In three key areas, respondents indicate they forecast outsourcing slightly less in 5-years time than they do today: clinical trial manufacturing, quality management support, regulatory support, and packaging. Most of us, I believe, would have expected increases.

However, so we don’t get out over our skis, the report clarifies that “respondents don’t anticipate much change” in their outsourcing rates, and none of these minor changes of this small (100 respondents) group are “statistically significant.”

So let’s call this a significant “flat-lining” for now, and put it down as an area for further attention as time goes on.  As I’ve said in the past, anything less than strong growth is notable to our drug development and manufacturing outsourcing industry.

Also of a more specialized interest in the ISR survey is some data on the utilization of lyophilization.

We recently discussed “lyo” in two editorials: “Lyophilizing All The Way To The Biotech Bank” and “No Freeze In Lyophilization Outsourcing.” In those, we reasoned for a sustained increase in the use of “lyo.”

First, because of the new classes of drugs that require freeze-drying techniques, such as polypeptides, oligonucleotides, and other new-drug categories – all told nearing some 500 candidates in clinical trials, adding to the handful of already-approved FDA drugs utilizing freeze drying. Second, there is a broadening acceptance throughout the industry of the advantages of freeze-drying processes and technologies; a certain change of heart, if you will.

Now, according to the ISR survey:

Allow me to end here with a related divergence, something I learned in a recent conversation with a former Big Pharma professional. For many years now he has been a consultant to biopharma companies of all sizes. He says there’s an added element to the building lyo story.

This he shared in an informative lament at cocktail hour: “If you really want to know what the biggest hurdle is in regards to outsourcing services currently, it is first finding CDMOs who can do lyo at requisite scale, second finding reliable, high-potency capabilities at CDMOs, but third, finding CDMOs who combine the two, and who can competently lyophilize for you in HP environments. And that is exactly what the industry will be needing lots more of.”

One more data point in our ongoing and developing analysis. When it comes to outsourcing drug development and manufacturing, while some areas may be reaching a saturation point of sorts – a point where a higher percentage of outsourcing can or will not be attained – other areas are in need of a vital ramp up just to keep up.