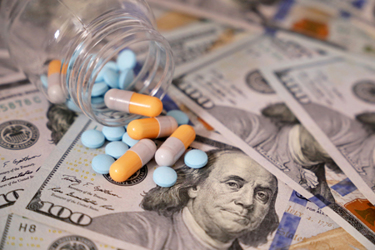 Is the rising inflation we are experiencing in the U.S. a major worry for biopharma CEOs who – as most all of them do – rely on outsourcing drug development and manufacturing?

“I’ll try to give you an answer that’s not too complicated,” says James Sapirstein, President, CEO and Chairman, First Wave BioPharma, a clinical-stage biopharma specializing in the development of targeted, non-systemic therapies for gastrointestinal (GI) diseases.

He and I are entering the final part of an incredibly open and wide-reaching conversation. (See Part 1 and Part 2.)

“What they are trying to do now is not going to accomplish what they want – ultimately make drug prices lower.” Sapirstein’s “they” refers for the most part to our politicians.

“And yes, this also relates to our working with CDMOs,” he says.

Inflation has risen, and continues; “transitory” has now been proven to be an adjective used to mollify a worsening situation.

Made worse, we’ll see, by some of the same folks trying to muscle drug prices down.

“As you have inflation in any segment of our industry,” says Sapirstein, “it ends up reflected in increased drug prices.”

If, for example, raw materials or labor becomes too expensive, price increases are passed down to the end-user, and/or cuts within the operating business are made.

“Cuts” within our industry means some drugs won’t be manufactured any longer, and some new drug programs won’t be pursued. “Products that have been or might have been available to patients, won’t be anymore,” says Sapirstein.

Particularly impacted are smaller companies like First Wave taking on smaller-market compounds, and underserved patient populations, who either won’t pursue those markets or will have to bump up prices.

“And something I point out all the time: We then squeeze CDMOs on price, which means we also squeeze out their innovation,” Sapirstein adds.

“What this country has that's better than any other is our pharmaceuticals industry.

“We are number one, and our manufacturers do a terrific job of figuring out tough problems. If you don't have the bandwidth to work on those problems, you cannot innovate. If you cannot innovate, the industry starts withering. You get less products, and the price of products will go up.

What of those who say – and the low popularity of the pharma industry will indicate they are believed – we have a model where Americans sacrifice by paying more than others for our drugs?

“I came from 17 years at Big Pharma,” Sapirstein replies. “When I was at Bristol-Myers and Gilead, I was charged with worldwide pricing. I've set prices on pharmaceutical products around the world.”

“A reason we appear more expensive is because the United States wisely separates FDA from pricing governing-authorities. FDA makes decisions based on clinical efficacy and safety of the therapeutic drug they're looking to license.”

Other countries directly tie efficacy and safety to price.

The pricing authority and the licensing authority are one and the same. It calculates drug budgets versus how many hospital beds and sheets need to be purchased, how many doctors to hire. It's all one budget. It is, in effect, drug-limiting.

“It’s based on a socialistic approach to drug reimbursement. The governments ‘pay’ for the drugs. Patients aren’t charged a copay. Of course the patients are happy.”

“They don't pay, but their national health system is bankrupt. We don’t have that approach in the U.S., and never should. Here it’s capitalism and an open market, not socialism.

To place all this back into our discussion of inflation, drug pricing pressures, and our network of U.S.-based CDMOs, some statistics will help:

So what are we really arguing about here?

Today we have political, societal, and loose monetary-policy movements serving up inflation negatively impacting CDMOs in the U.S., and further denting their competitiveness.

All the while we have politicians browbeating the pharma industry to reduce prices. (And we might add, give away vaccines.)

This is the macro-mishmash Sapirstein is willing to point out.

“I will go on record,’ he says. “The way to affect pricing is to fix insurance copays and PBMs [pharmaceutical benefit managers].”

There's a reason, he says, copays were five or ten dollars a prescription in the nineties – and no one cared about the cost of prescriptions. Insurance companies had negotiated deals with the pharma companies; they were absorbing the cost of the drugs – as they should have – based on negotiated discounts.

Today insurance companies have it both ways: those discounts and charging huge amounts of copays.

Sapirstein estimates insurance companies and PBMs control somewhere between 40% to 60% of the U.S. healthcare dollar.

“Where do the PBMs get their margins? From hospitals and the doctors who are making less, and  thus need to see more patients to stay in business,” he says.

“Pharmaceutical companies – and our CDMOs – are not the problem. Our pricing structures have barely changed, at less than 10% of the U.S. healthcare dollar.”

We have to leave of here, but to say:

We need more folks like Sapirstein willing to set the record straight.