Nations Should Be Able To Take Care Of Their Own 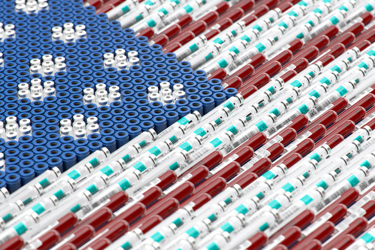 That learning started with a crash course.

Davis was hired as Providence looked to “enable” a start-up CDMO, and establish an all-Canada COVID-19 vaccine and supply chain. (see part one here)

The biopharma became a focal point in a national “Canada First” initiative.

“But I do agree,” Davis continues, “when it comes to health care, and especially these health-care crises, every country should be able to take care of their own.”

That difference is worth investigation.

Davis – diplomatic and intimately qualified – is the perfect professional to guide us into these national pandemic waters.

Regarding “national health-care independence” and the coronavirus, Davis says:

“What will happen is what is happening. For example, Europe said we're not letting Pfizer vaccines out of Europe. America isn’t far behind in that thinking of vaccinating everyone at home first.

“I get it. The U.S paid how many billions of dollars to develop that vaccine? Why wouldn't they vaccinate us first? It’s just natural.

“Being able to stand on your own two feet, and take care of your own people, is important. In this respect, I’d say Canada is very nationalistic.”

“Nationalistic” as a positive attribute.

It conscientiously arises from concern for one’s immediate communities and country, and an attitude of can-do capability and self-responsibility.

That’s a philosophic principle less accepted in the U.S.

Since the 2016 presidential election, some half of the political class and populace have demonized “America First” policy because of who has led it.

“Yes, that dynamic is different from Canada,” Davis says cautiously. “In the U.S, it can be politically divisive. Here it doesn't seem either party is against the idea of taking care of Canadians first.”

That doesn’t mean politics have been entirely set aside.

Because the Canadian government hesitated to get behind Providence’s plan to develop an mRNA vaccine and domestic production model within Canadian borders, the opposition party has tried to take political advantage, particularly now that other mRNA vaccines have been approved.

“I understand some reluctance to our proposal initially,” says Davis. “We’re still a young company.”

Eventually, a growing chorus of national concern overtook further delay in providing at least some initial funding to Providence.

“Now our plan and efforts are all over the Canadian media,” says Davis. “Unfortunately, some reports are critical of the government for not funding us sooner.”

Trudeau replied by proffering full support, pointing to an initial $4.7 million funding, and indicating more dollars could be on the way.

“I don't know we intentionally put ourselves in this role,” Davis says. “However, from the beginning, as a Canada-based biopharma we were out front putting together a domestic supply chain, including standing up a CDMO for production.

“We had a Canadian solution and asked for help implementing it.” (details on the CDMO in part one)

That CDMO has been established – Northern RNA, figuratively just down the road in Calgary – and Davis is happy to think more expansively.

“We're comfortable enabling other countries with our mRNA vaccine technology. Northern RNA is open for that. We’ll work with other nations to help them accomplish their domestic reliability.”

And that may be the main point to all of this.

“To be capable of fully helping others is to first be able to securely take care of yourself. Reach out from a position of strength,” explains Davis.

“We are a wealthier nation. This is how we can be a better global citizen. We're not taking away from another country.

“I understand all countries can’t take this on, but any country that can, should be afforded the ability to respond.”

Sadly, the ultimate contradiction to this is when those “wealthy” nations find themselves incapable of taking care of themselves because so much production capacity has been offshored.

“When it comes to healthcare during the pandemic, we've already seen this,” says Davis.

“What happened with all the PPE – how hard was it to get it out of China, where we had outsourced everything? There was a gap in time where we were unprotected because we couldn't get the PPE we needed.

“We also couldn't get the swabs and other items we needed, because we didn't build our own infrastructure.

“It's a global economy, I agree fully. We rely on and help each other. International markets are key. But to offshore so much from the U.S. and Canada? It’s not good policy.”

Nobody In Canada Capable?

Before ending our conversation, I couldn’t help but put the following before the good-natured Davis:

“I’m a long-term parliamentarian in Canada. I look at Trudeau during the Q-A session, and ask: ‘Why do we have to bring in an American CEO to run this? Can't we find one in all of Canada capable?’

“Of course that’s a good question,” he says, obviously practiced in this particular reply.

“Providence brought me in – pre-COVID remember – because I've been working in the field of mRNA for a long time, helping develop these processes.

“We saw this from the aspect of a major manufacturing challenge – setting up an independent CDMO included.”

Did Davis anticipate the criticism he’s received as an American now involved in a “Canada First” initiative?

“I honestly had no idea how political any of this might become,” he says, seemingly looking off in the distance across the vast Alberta landscape.

“This is a great place and nation. I want to support it. I'm fully supportive of any country that wants to do this for themselves, to be self-reliable in its healthcare. I think it's the right thing to do.”

A supply-chain message for his now southern neighbors.