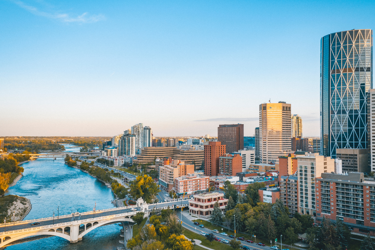 The story is all over Canada. Unfortunately, that doesn’t mean it’s all over anywhere else.

For Outsourced Pharma readers, it has both familiar and newly enlightening components:

Both Providence Therapeutics President Jared Davis, and his counterpart Brad Stevens, President and CEO of emerging CDMO Northern RNA, were gracious enough – through separate interviews – to help us learn more.

Providence is in phase one clinical trial for PTX-COVID19-B, an mRNA vaccine for Covid-19. The company anticipates “rapid transition to later phase clinical trials and preparation for commercialization” this year.

The company was co-founded in 2015 by Brad Sorenson, whose son was diagnosed with cancer at age 13, and Eric Marcusson. Its first lead candidate, personalized mRNA cancer vaccine PTX-101, intended initially for women with advanced ovarian cancer, is also in phase one study.

“I've talked to multiple CDMOs about personalized cancer over a period of time. I ask them how we can set this up. None have a model.

The subsequent pivot to a large-scale COVID-19 vaccine didn’t improve the outsourcing situation. A different set of challenges presented themselves.

But Davis was hired to overcome those.

According to the company, he will “oversee implementation plans to establish new vaccine manufacturing capacity in Canada in collaboration with an mRNA manufacturing partner.”

Davis is a leader in the mRNA space. Among other positions, most recently as VP of Technical Operations and Manufacturing at Arcturus Therapeutics in San Diego, and previously at Boston-based Alexion, where he developed novel methods for manufacturing mRNA, and was CMC lead for its collaboration with Moderna.

The new “manufacturing capacity in Canada” he’s overseeing will come from Northern RNA.

“Northern RNA is not a subsidiary of Providence. It's a fully independent entity we're enabling to get built out right,” says Davis.

Providence first pitched the Canadian government for seed funding for a fully independent CDMO in early 2019, prior to the pandemic.

“When COVID hit,” he says, “we realized more than ever the need for a Canadian solution.”

“I also personally believe there’s a need for each country, or region perhaps, to have their own capacity to produce vaccines,” says Davis.

But while the government took its time to come around to the idea, the vaccine producer began producing its own CDMO.

Northern RNA started when Providence founder and CEO Brad Sorenson started looking around Calgary for someone with experience to talk to about their idea for a CDMO.

While they didn’t find somebody with a scientific background or CDMO experience, they did find newly retired senior government leader, Brad Stevens. It turns out he was perfect for the job.

What Stevens understands is real estate in Canada, facility placement, design and construction, contracts and financing.

“Brad [Sorenson] and I have known each other for a long time from being active in the community,” explains Stevens. “He pitched me on the opportunity.”

Stevens then dispels any notion he isn’t up to speed on the CDMO space, by expounding (in a rapid pace):

“Not many CDMOs have an anchor customer to get started. And we are already receiving phone calls from people asking questions about our services.

“So we are committed to helping Providence ultimately provide the vaccines Canada needs. At the same time, we are focused on immediately supplying the critical building blocks for messenger-RNA for any customer in the world – cap analogs and plasma DNA.

“I just signed off on engineering plans for an expansion to a GMP facility to actually begin making the vaccine for Providence. And whoever else we might contract with along the way.

“So, our business plan is to start in the wet lab and to make these two building blocks for messenger RNA, and then go into high-expansion mode in the next weeks with construction to start on the GMP plant.”

What Stevens is repurposing is a stand-alone, former oil-and-gas-related facility.

Davis, for his part, is concentrating on what’s inside.

“We're transferring our technology to Northern RNA, so they have access to those processes to use for other companies,” he says, then adds:

“I’ve worked with CDMOs for years. There’s always a concern about a CDMO with a close relationship, or as part of, another pharmaceutical. Northern RNA is 100% independent; we’ll have no visibility as to who their clients are or what they are doing.”

Besides that tech transfer, Davis and company let Stevens hire away their Head of Lab Operations to assist with the recruiting effort.

“By many standards, Jumai Abioye has an excellent, proven process, and is intimately familiar with plasma DNA,” a thrilled Stevens tells me.

“And we've already had some great minds come to us. We're about 60% through our hiring on the biology side, and starting on the chemistry side.  Stevens expects to have 40 employees by year end. Calgary is a great place to recruit, and as the 5th most livable city in the world, it’s a great place to live.

And hopefully for Providence, soon a great place to manufacture its mRNA vaccine for COVID-19.

Stevens actually started searching of a greenfield site for his CDMO.

“We looked at building a GMP facility to scale up in stages – there are good real estate opportunities in Calgary, because of the challenges of the oil-and-gas industry. I had drawings for a greenfield facility and was speaking with investors.

“But Brad [Sorenson] called in March and said, ‘COVID will be much worse than anybody thinks. Don't sign any leases yet.’”

A few months later, Sorenson returned with a new plan: hold off on the GMP manufacturing facility. They were going to need starting materials – those cap analogs and lipids.

“So now we didn’t have to build a GMP facility; we needed to find wet labs immediately,” says Stevens.

Stevens eventually found what he was looking for, in terms of lab-readiness and build-out potential – a standalone, former oil-and-gas facility of about 24,000 square feet, 10 minutes from Downtown and only 15 minutes from the Calgary International Airport.

“I began a virtual roadshow,” he says. “I set aside 90 days to raise the initial money we needed; it took less than 30.”

Word was out, national interest was up, and before long private equity and investors had pitched in 90% of his initial funding goals. (Providence was not a direct investor.)

Meanwhile, in October of last year the (Canadian) National Research Council Industrial Research Assistance Program committed to providing up to $4.7 million in funding to support the development of PTX-COVID19-B.

Then in January of this year, Next Generation Manufacturing Canada (NGen) added $1.6 million to Northern RNA via a dual-submission application with Providence, “to advance its COVID-19 vaccine research and support its manufacturing capacity.”

At Outsourced Pharma we talk a lot about new drug-sponsor/CDMO business models and partnerships.

But I don’t believe we’ve seen one quite like this.

The Providence-Northern RNA story again demonstrates how both sides of the outsourcing equation can innovate and work together to serve the needs of the populace, and a nation.

Next, we turn to that national angle.