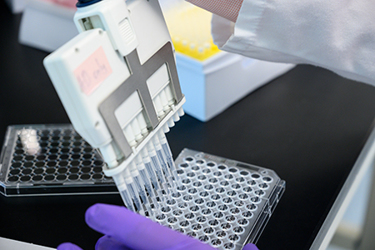 The solution for these emerging organizations, he says, is to build out internal capacity.

Then outsource tactically in later stages.

Niss, who previously held leading c&g roles at Novartis, Pfizer, and Biogen, spoke to me about how he’s accomplishing this at Mustang Bio.

“I'm never proud of anything other than my kids,” jokes Niss during our discussion, “but we have established some wonderful assets that I'm close to feeling that way about.”

Those assets include a 28,000 sq ft facility leased from the University of Massachusetts, at its Medical Science Park (“right across the street from UMass Medical School”).

To date, 14,000 sq ft of the facility have been fully built out; the additional 14,000 sq ft are under construction. The space is divided into four cleanrooms – each to house a separate development program.

“I was employee number two at Mustang,” says Niss. “My first assignment was to look at what makes more sense for us: going to a CDMO or building out our own manufacturing facility.”

Already at that early juncture in 2017, the company (founded by Fortress Biotech), was filling a pipeline of CAR-T and other cell-based programs for development and potential commercialization.

“Based on modeling for what it takes and costs to produce these types of products – the decision to build our own capability was certainly the right one,” he says.

“When you have multiple autologous programs – the keyword here is autologous –it’s actually more cost-effective to produce in house.

“CDMOs will always ask for a premium on capacity, the reservation of suites, and materials. Running multiple programs and processes becomes expensive.

“So while building internal capabilities is an investment that will take a few years to pay off from a financial standpoint, it's worth it for a fuller pipeline.”

Mustang’s location in Worcester – just outside of Boston – offered leases at “a fraction” of the cost of those in Cambridge, for example, but still offered a workforce for its manufacturing needs.

The facility was designed to operate “completely independent of any third party,” explains Niss.

“Not just the actual manufacturing, but also the quality-control aspect. In other words, all release assays are run in-house before the product is released to the patient.

“This internal capability, while it may be hard to capture in a financial analysis, provides flexibility to turn things around quickly.

“In our facility, should we ever fail a process validation, we could start again the next week.”

“I know this all sounds quite ambitious to emerging biopharma companies, but for us, by the end of this year we’ll probably have four open INDs, and four products to be manufactured simultaneously.”

Outsourced Pharma readers may note both similarities and differences between your own emerging organizations and Mustang Bio.

Perhaps one similarity is a start-up biopharma with less focus on research than those in the past, and more on development and manufacturing.

Another might be a “technology platform” which provides a young organization with an early pipeline of molecules and programs.

Differences may include access to ample funding to build internal capacity, and actual investor reluctance for such internal build out.

Another difference may simply be an early, positive experience you’ve had with a CDMO that keeps you on the outsourcing track.

In fact, let’s take a look at how some outsourcing Mustang Bio did decide to undertake worked out.

So Why Outsource At All?

“We quickly began looking for an opportunity to expand into the European market,” explains Niss. “This is not just an ‘orphan’ treatment, it is ‘super orphan.’ Estimates are between 20 and 30 new patients a year in the U.S. and Canada.”

“The same is estimated for Europe; to go there doubles the commercial opportunity, not to mention providing European patients access to a critical therapy.”

But this time, building out and managing a facility in Europe was cost prohibited.

“Instead,” says Niss, “we took a page from the playbook of bluebird bio, which previously worked with this same CDMO and got a product approved.”

“Theirs was a good example of a CDMO that is interested in these orphan indications, and one knows how to work with a c&g biopharma.

“We looked at the economics of different models. One was bringing patients to the U.S. for treatment. But these are heavily immune-compromised children; that would be difficult.

“We considered bringing the starting materials in, manufacturing in Worcester, and shipping back to Europe. At the least, this would have introduced product quality, importing, and regulatory complications.

“With these and other considerations, it made sense to now work with a CDMO.”

And in this case, there was a CDMO to work with.

“I've been in cell therapy for years now,” reflects Niss. “I’d like the field to progress even faster.”

“I'm aware not every startup can build their own manufacturing, and there are some clinical programs progressing slower than they should because of lack of capacity at CDMOs.

“I’d like to see both more internal capacities, and certainly more CDMOs set up to help companies such as mine.

“Regarding CDMOs,” concludes Niss, “it comes down to some fundamental factors, such as how they manage their capacity, and what we as customers can promise them.”

In part two, we’ll get into that capacity management, those promises, and four specific pieces of advice from Niss for Outsourced Pharma readers.