This Biotech Failed At Outsourcing: Here's How You Succeed Instead 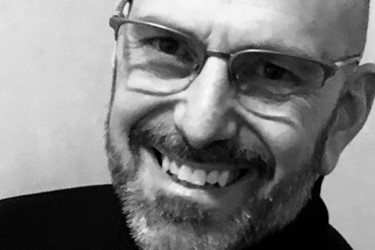 A small, pre-revenue biotech needs a service provider to figure out how to synthesize and provide amounts of five metabolites that appeared in their lead candidate. There are no known synthetic routes; the urgency is high.

How does the company approach the challenge?

“They run to momma,” as Robert Discordia, VP at Corbus Pharmaceuticals, put it during his presentation at Outsourced Pharma Boston 2019.

“First thing, someone says, ‘I know two or three places that could probably do this. Let’s get an RFP out.’ Sure enough, the responses that come back differ, and the biotech hasn’t fully thought through criteria to select among them.”

The biotech opts for the CDMO with the lowest cost and shortest duration, which turns out to be $40,000 and 10 weeks to completion. “It sounds about right to the biotech,” says Discordia.

Ten weeks later, only three of the five compounds are done. There are problems with the fourth; the fifth hasn’t been started. The CDMO approaches the biotech with the dreaded change order.

“The biotech hadn’t considered this crossroads, either,” says Discordia. “They are out $40,000, out of time, and feel they can’t take the project out to a new provider at this juncture.”

Three Bids And A Buy

“It’s the classic ‘three bids and a buy’ mentality,” explains Discordia. “It has you underestimating what could go wrong. Worse, you are treating your own project like a commodity. Furthermore, the contract itself implies time is not important, because you did nothing to ensure it was important.”

We can add here there’s also the assumption the supplier is completely upfront with their time estimate. But do they really know how long it will take? Perhaps they know this: If they put 14 weeks on the RFP, they won’t get the business.

All told, says Discordia, “The sponsor did not incentivize a single aspect – time, cost, or most importantly, quality. So, the responsibility for this situation is on them.”

So why is this biotech outsourcing in the first place?

The correct answer according to Discordia is, “It needs access to high-performing professional services.”

“That's really it,” he declares with some further emotion. “It is not: ‘I need x compounds in x weeks.’”

What does the biotech actually want provided?

What outcomes are ultimately desired?

The compounds are delivered early or on time, with complete quality.

Discordia claims there is a method to increase the chances of full success – or even improve upon acceptable outcomes:

Create a service model at the outset that “actually incentivizes the behaviors and all these outcomes you want.”

“First of all, by engaging in this type of competitive bidding process, the biotech has likely pushed down the supplier’s profit margin,” Discordia starts his explanation for improved results.

“Providers say, ‘We don't have A or B teams,’ but everybody knows there's a spectrum of talent wherever you go. A CDMO won’t give you their ace or top team if you’ve pushed their margins from 25% to 12%.”

More dramatically, this also means you “may be pushing down your quality, which ends up increasing the possibility of delays, and time is money.” 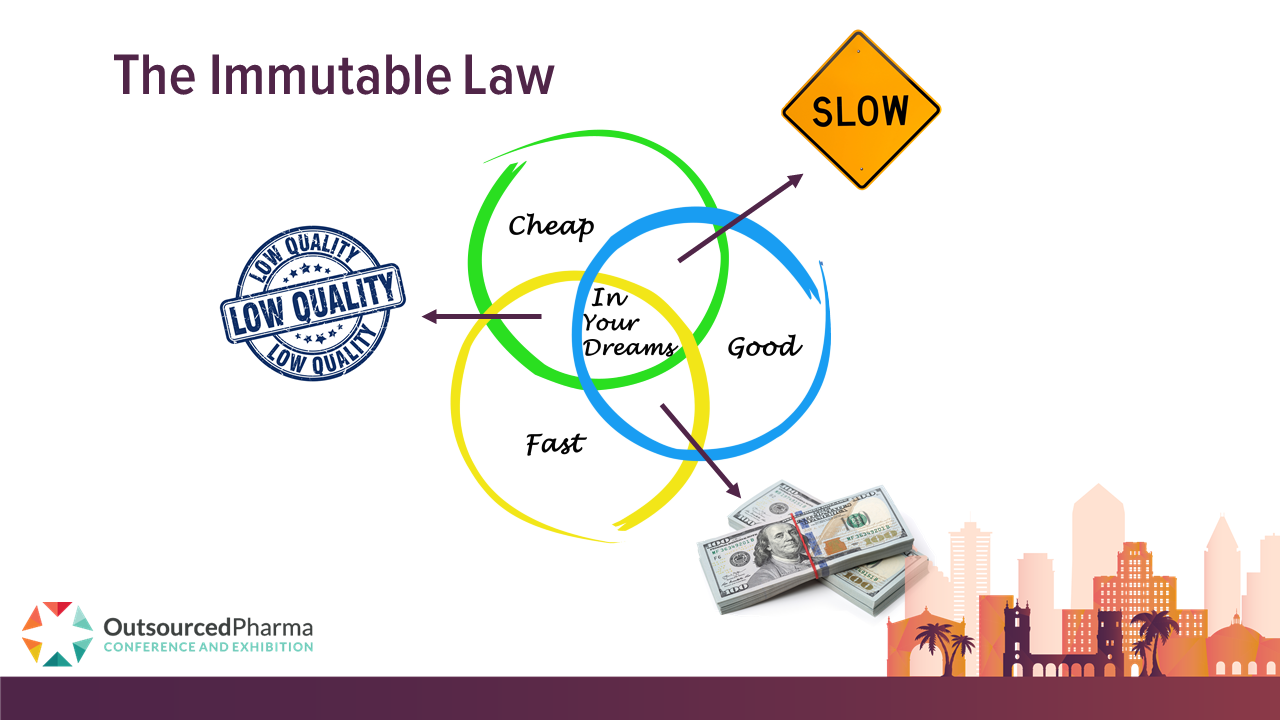 “Immutable, yes,” says Discordia, “but everybody still tries to get all three.”

“The biotech should have focused on access to high-quality professional services completed in a reasonable amount of time. Guess what? That's going to cost something.

“So create a service model where the sponsor and provider are considered in the contract. I’m not talking about a long-term relationship. This is a book of work that needs to be done right away.”

“It’s a model where I also find a way to get their ace, or A team, and in which the provider benefits from a customer interested in their success as well.” 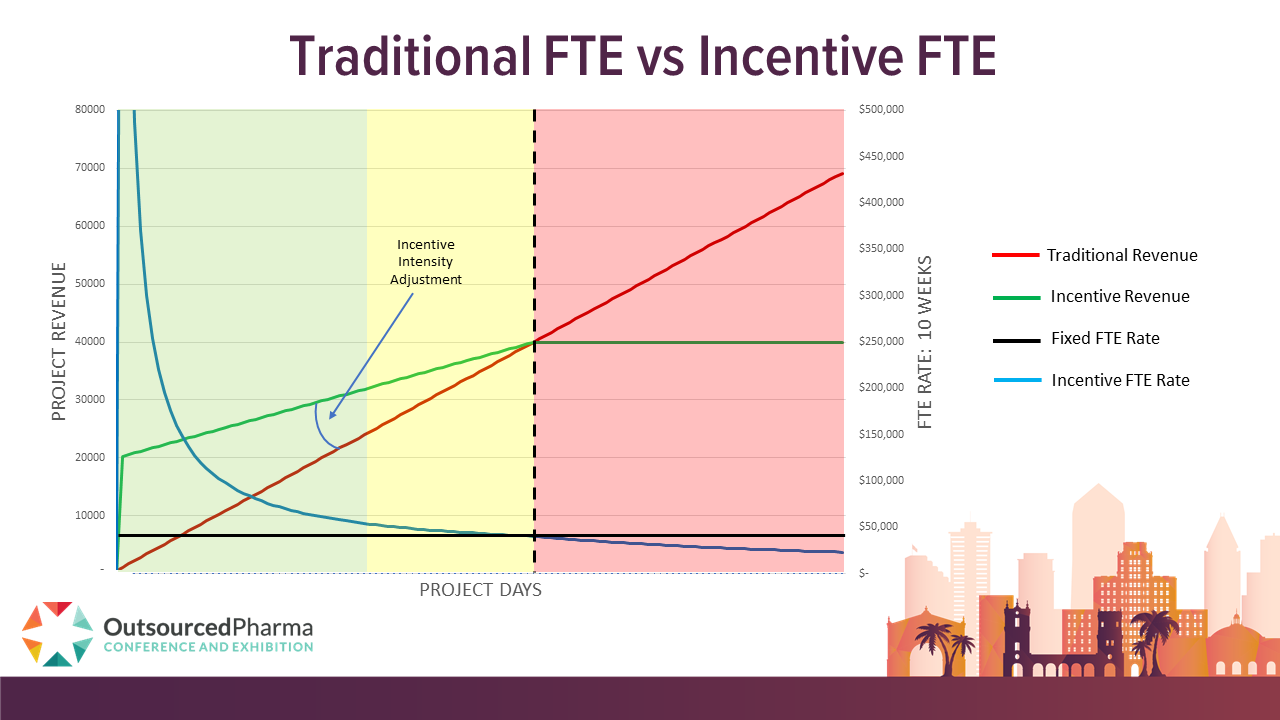 In this chart, Discordia has the red line showing the cost-timeline relationship when you bid as time-and-materials. The x axis is time; the y axis is revenue to the provider – your cost.

For our biotech above, “where the details such as cost, time, etc. have been simplified for the discussion but are directionally accurate”, the FTE gets paid $4,000 weekly for 10 weeks, totaling $40,000. But actually, no matter how long it takes – even if its 20 weeks, it's $4,000 a week. The horizontal, black dotted line represents that effective FTE rate and shows the coalescence of this model (vertical, black dotted line) and Discordia’s devised Incentive FTE Model, which is the green line.

“That's a ridiculous scenario, but indicates how the effective FTE rate goes down every week required to do the job, until we arrive at that original rate the CDMO signed up for: $4,000 a week.”

Discordia is in effect telling the CDMO if you go past ten weeks in this model, there’s no more money forthcoming; the provider is obligated to finish.

“Not all providers want to sign up for this,” Discordia confirms, “but a lot of companies are intrigued by that incentive side of the model. When I first tried this in my career, there weren’t a lot of takers. Now it has proven to work, there are more providers working in this outsourcing model.”

“What actually happens here is magic,” says Discordia. “It happens as the FTE rates are meeting that coalescence point. There’s an incentive. The provider wants that bonus. They’ll keep or put their ace on the project. Even more, they think, ‘If I add one more FTE, I might get this out in seven weeks and a bigger bonus.’ And with the A team, quality is assured as well.”

We Love A Happy Ending

Applying Discordia’s incentivized FTE model to our biotech’s project, it gets completed in a shorter timeframe, described by this chart. 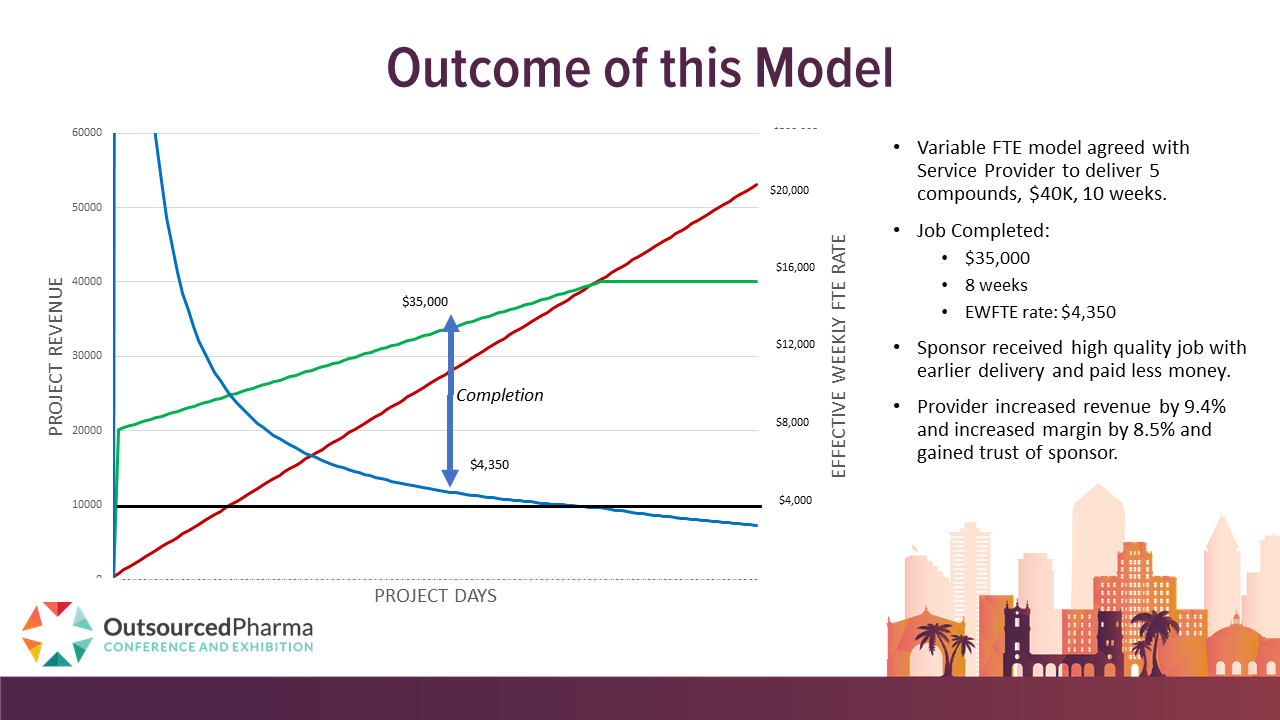 “You might think that's not good for the CDMO,” says Discordia. “However, because the project was completed in eight weeks, instead of $4,000 a week, they received an effective FTE rate of $4,350. They increased their revenue by 9.4%. Instead of $32,000 at the end of eight weeks, they got $35,000. The effective FTE rate went up 8.5%. There was no need for do-overs, no delays, and they have a satisfied customer who will come back.”

Furthermore, the FTE can transition to his next project two weeks early, generating more revenue for the CDMO.

And the sponsor? One happy biotech that received high quality, early delivery, and paid less.

The immutable made mutable in outsourcing. Magic indeed.

*Robert Discordia will be keynote speaker at Outsourced Pharma San Diego 2019, on October 16th. Please email Jenell Skemp at jenell.skemp@lifescienceconnect.com if you’d like to consider joining us or have any questions.