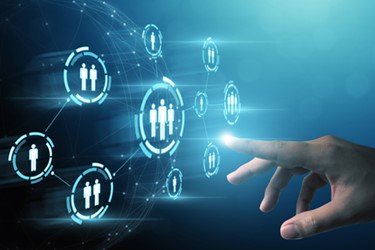 The “six degrees of separation” concept is that any two people can be connected in a maximum of six steps.

Seconds into meeting him for the first time, he asks: “Do you know Martin VanTrieste of Civica? He came to see me. We spoke about producing API for common drugs used in hospitals.”

I reply yes. Martin has appeared in Outsourced Pharma.

Gupton then asks: “Do you know Rosemary Gibson? She came to see me. She’s focusing government on bringing biopharma manufacturing back to the U.S.”

I inform him Rosemary’s been a keynote speaker at our conferences.

Gupton plows ahead: “I think you and Rob Wright of Life Science Leader are colleagues. Maybe he told you about me?”

This time I reply not really, other than you are a university professor. “So why are all these people coming to see you?”

Readers will be fascinated to find out.

“First off there just aren't enough people working on this continuous manufacturing platform,” says Gupton in his office at Virginia Commonwealth University (VCU). “But when you think about it, a main reason people go to places like India and China is labor cost. Batch manufacturing, which most pharma still do, is labor intensive.

“Producing continuously, though, drugs can be produced in different places. That’s why it’s getting so much attention now.”

And why Gupton is, too. For one thing, he’s the CM man.

Am I exaggerating his six-degrees status?

In the course of an hour-long conversation, he mentioned (off the record) the highest level of government officials who have contacted him; he’d spoken in detail to Janet Woodcock, Director of the Center for Drug Evaluation and Research (CDER); he has an ongoing project with DARPA; he speaks to numerous industry professionals involved in continuous manufacturing, such as Scott May of Eli Lilly and Company.

A while back, after a career culminating in 14 years as Executive Director for Process Development at Boehringer Ingelheim, Gupton was ready to retire. Instead, he was “coerced” by academia. His official title is Professor and Chair of the Department of Chemical and Life Science Engineering in the VCU School of Engineering. He oversees a “fifty-fifty mix of chemists and chemical engineers.”

In 2017, the school of engineering was awarded a $25 million grant from the Gates Foundation to establish the Medicines for All Institute. Part of the mission is to “work on driving down the cost of APIs in order to increase access to global health care.” Gupton serves as principal investigator for the institute.

His attention is now being directed (by his many connections) to U.S. drug manufacturing – of both common generics and new drugs.

He believes the wide implementation of continuous manufacturing can help wrestle the U.S. from an API supply chain dependency on China and India.

And, Gupton feels, “the time is finally right.”

“We've been working in this space for years, but this is the first time I've heard such a noise level, and it's coming all at once. Now it's on everyone’s radar screen.”

“I think the jury's still out on what the actual model will look like in the future,” he says thoughtfully. That's not been sorted out.”

“People are just coming to grips with the fact of our [drug supply] vulnerability. They're at the point of saying, ‘What if we did have that manufacturing capability somewhere in the US? How much would it cost if we used advanced technologies and automation?’”

Gupton informs me he has in fact been asked to create a variety of cost estimates for potential drug manufacturing operations in the U.S. He’s certain there are opportunities for both innovative and generic drugs.

A Word on Processes

Gupton ask me to consider an example where an API is made in the U.S.

“Where do the feedstocks [starting materials] come from?” Gupton asks, and then answers: “Most likely India and China.”

To lesson that legacy dependency, he and his researchers and engineers suggest going back to identify “simpler commodity feedstocks and building blocks, to make these complex molecules from more commodity chemicals.”

“It's a counterintuitive approach from the way most pharma operations work,” he explains. “Pharma buy the most highly functionalized advanced starting materials they can, and in a minimal number of steps process the API.

“We're looking at actually improving the overall efficiency by first going back into set processes to make API from more inexpensive, and at the same time more readily available, starting materials. It’s not the normal approach. But it will strengthen the supply chain, and greatly reduce the cost of molecules.”

Gupton continues: “We also run processes that don't generate such an excess of waste. We took an HIV drug that was generally a good process, but generated about 70 kilos of waste per kilogram of product. We cut that to four kilos. We took the yield from about 55% up to 92% across the entire synthesis.”

And Gupton wants us to start thinking more about manufacturing “common medicines” in the U.S.

“We should start there,” he says. “If you look at new patented drugs, API costs are a small percentage of the selling price. But for generics, it's about 50% to 70%. That's where the opportunity is.”

But this’s not to suggest innovators don’t have their opportunities in the U.S. as well.

“This is an important point,” he says seriously.

I have just questioned him – with the proper upfront apologies – about the real-world influence of academia on new-drug production in the biopharma industry.

“I get calls from leadership at most of the big pharma companies,” he says, in typical six-degree fashion.

“They want to recruit our students. That’s because everything we do is driven by economics. We look at existing processes, identify the cost drivers, and figure out how to make them more cost effectively.

“I really believe there's an opportunity for flow chemistry [a term used synonymously for continuous manufacturing] in the future of innovator drug production. Look at the drugs in the pipelines at most pharma companies; there's a tremendous increase in highly potent compounds. Flow chemistry is uniquely set up to handle that. Since you're making such smaller amounts, you can put a flow reactor inside a glove box and mitigate all risks associated with making the material.

“We never should've named it ‘flow chemistry,’ adds Gupton. "Chemists perceive it as an engineering phenomenon, but it’s really a kinetic chemistry allowing you to isolate transit intermediates formed in a process, so you can then do advanced chemistry onwards. You cannot do that in a batch reactor.

“One of my bosses used to say once you've made material in a batch reactor, nothing good can happen. There’s a long residence time, which presents so many risks. In flow chemistry, you make material and get it out of the system quickly. There are all kinds of advantages.”

And connections. We’ll check back in with Gupton soon. Like everyone else it seems.