Mulkerrin On Outsourcing: Speak Softly And Carry A Good Rapport 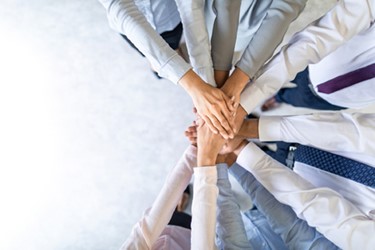 Michael Mulkerrin quietly takes his seat behind the panelist table at Outsourced Pharma San Diego 2019. With a scientist-in-deep-thought aura, he’s hardly noticed above his microphone.

Until it’s his turn to speak.

The room focuses in anticipation of what’ll be imparted once Mulkerrin’s habitual pause before speaking has lapsed.

It’s his second appearance – the only repeat panelist at the conference – and the audience has already learned this:

The soft delivery is inversely proportionate to the strong impact it makes on fellow professionals involved in drug development and manufacturing outsourcing.

Mulkerrin is VP, Head of CMC, at ADC Therapeutics. He’s been a part of the biopharma industry for 35 years, the first 16 of which were at Genentech. He’s also a member of the Council of Experts, United States Pharmacopeia (USP).

ADC Therapeutics, where Mulkerrin has spent the past 5 years, is a spinout of Spirogen (AstraZeneca group). Spirogen was among the first to develop PBDs and take them forward to create ADCs for therapeutic use. (Pyrrolobenzodiazepines are a class of sequence-selective, DNA minor-groove binding, crosslinking agents).

The first panel discussion Mulkerrin participated in was titled, “The Grand Transfer: Best Practices For Getting Your Project To Your CDMO.”

An attendee asked the assembled experts to offer a “tech transfer horror story” as insight from “lessons learned.”

Mulkerrin paused, then leaned toward his mike.

“Sure, but I really did want to share a positive experience,” he says, drawing some laughter.

He then describes how a previous company he worked at developed antibodies, and had a series of projects to outsource to a single service provider.

“What we decided – and what I’ve decided to do in every instance where I've been leading the manufacturing function – was hire people internally to become involved in the manufacturing. We don't ever send off a project and have a CDMO just run it. We always work diligently with the CDMO, establish a good rapport, and are involved in all the decisions.”

In this particular case, Mulkerrin’s company had the capability to do some of the development work internally; they had established cell lines and the manufacturing process prior to the external transfer.

“In the transfer,” he explains, “you'll find the CDMO wants to take in the molecule, work with it themselves, do small-scale runs, a pilot batch, then go to GMP. This takes well over a year before you can get an IND submitted.

“At every company I’ve worked, fourteen to eighteen months to get an IND is a pressure point. Folks in management are saying, ‘Well, we saw a presentation by so-and-so, they did it in nine months, how come you can't do that?’

“In order to address this timeline challenge, we brought in the cell line and developed the research cell banks in house. We established that critical rapport with the CDMO, and we were on site for the transfer. We also brought scientists from the CDMO into our company for the first two molecules.

“By the time we were developing the third molecule, we were able to eliminate the small-scale runs, and directly produced the pilot run. We manufactured the toxicology batch as part of a pilot, and then went straight to GMP, eliminating at least 4 months off the timeline. This was only possible because we were able to gain the experience and confidence between the CDMO and our internal team.”

Mulkerrin adds that his company also established a platform, “so each time we transferred to the CDMO, it was nearly the exact same process. The learning curve was gone. In nine projects, we had zero failures in GMP.”

He sums up: “What we did was risky for the CDMO – eliminating all the early work and walking straight into the pilot and GMP batch. If there's a failure, they're not getting paid. Senior leadership had to buy into the risk. So it's vital to establish a rapport with the team you're actually transferring to, and particularly on the senior leadership level.”

Steering From The Top

Mulkerrin turned his thoughts towards that leadership involvement – the need for senior staff at both the drug sponsor and the service provider – needed to move programs forward successfully, and quickly.

“One of the mechanisms we believe contributes to managing an outsourced manufacturing program is to put in place a joint-steering committee with our CDMOs.

“This is a way to have people in senior leadership of both organizations working together.

“To be clear, though” he says, raising his voice just slightly, “these are not the project members themselves. The individuals on the joint steering committee must be those company executives on both sides who can reach the bigger decisions in a timely manner, and have the authority to make decisions.”

And as Mulkerrin mentioned above, this higher level of interaction also thrives on what he deems “the rapport to achieve mutual goals.”

Many professionals have told us at Outsourced Pharma: Do not take up work with a CDMO where you feel you have limited access to (or interest from) senior management.

One of the Individual Attribute Awards at the annual Life Science Leader CMO Awards – of which I have the honor of serving as master of ceremony each year – is “Accessible Senior Management.”

That accessibility, says Mulkerrin, leads to “a high-level transparency on both sides of the outsourcing equation.”

“It’s great to have transparency at the level of the operators and the project team. Programs usually work better when it’s there,” says Mulkerrin.

“But there will be occasions when the people involved are reluctant – even embarrassed – when challenges occur. They’ll have trouble communicating, or won't want to talk about an issue at all.

“However, if you've established that relationship and transparency at the level of the JSC, those challenges get worked out effectively. Issues are brought to light and can be resolved quickly.”

Mulkerrin concludes: “So putting it together, you need to work with a partner whose structure allows for readily escalating challenges to the right people. And you need to have senior individuals engaged with the program who have the responsibility and authority to close issues. With this process, everyone can move forward calmly.”

Our next conference, Outsourced Pharma Boston 2020, will be held in Cambridge, MA, on May 20th. If you’d like to join us, or have questions, feel free to contact me directly at Louis.Garguilo@LifeScienceConnect.com.