Farm To Pharma: Outsourcing Lessons From Back Home 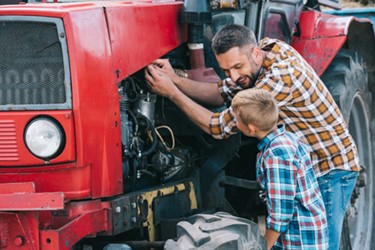 “I learned about quality, and the concept ‘You get what you pay for,’ growing up on our farm in Idaho,” somebody suddenly says to me at a recent conference in San Diego.

He’s just joined the other biopharma professionals gathered at this “standing” table. We are sipping beverages and discussing challenges with drug development and manufacturing outsourcing. “We used to buy used tractors to save money,” he says after introducing himself.

“Then we’d spend more money, and time, trying to keep them running. One day the more experienced farmer next door – who bought new tractors – came over and said to my brother, who ran the farm: ‘If you can afford old equipment, you can afford new equipment.’

“I find myself falling back to those formative experiences. I’ve thought about them throughout my career when making outsourcing decisions.”

I also thought more about that old tractor on my flight back to New York.

A few weeks later, I gave Marty Hughes, Senior Director, Pharmaceutical Services, Cidara Therapeutics, a call. Sure enough, he had more down-home aphorisms for us.

When It Rains On Pharma

Hughes says the discussion at Outsourced Pharma San Diego 2019 had him yearning to help others with development and manufacturing outsourcing challenges.

He’s responsible for CDMO relationships at Cidara, a clinical-stage biotech focused on developing novel anti-infectives. Rezafungin, a novel molecule in the echinocandin class of antifungals, is the company’s first commercial product. Cidara has also established a development platform called Cloudbreak.

Hughes starts by revisiting his tractor story. He says it relates “to the efforts we put into aspects along the entire biopharma manufacturing operation.”

“Whether it's the equipment itself – ensuring first of all you have the right equipment, and that you budget for that right equipment – but also all the supporting accessories. Things like your analytical work, and the quality systems that support the entire development and production continuum.”

He pauses. I want to keep him focused on that farm-pharma relationship. I interject with (the stereotypic urbanite) question: “Was your farm in Idaho a potato farm?”

He cuts me some slack with a diplomatic reply, and his next thoughts follow:

“Not a potato farm, but we had cows and pigs, and a of different crops. I’d start out by saying operating that farm takes a lot of planning. In agriculture, you’re at the mercy of much that is outside your control – particularly the weather. You have to do a lot of contingency planning.

“You’ll have your plan in place, but you must have a backup plan for when plan A gets destroyed by a hailstorm, or whatever it might be. So to translate, that’s relevant to the day-to-day work we do in pharmaceutical outsourcing: contingency planning is a must have.”

Hughes says that plays out in the concept of supply chain redundancy.

“At Cidara, we study and plan carefully for redundancy in our supply chains. Particularly, in today's regulatory compliance environment, the industry has seen an uptick in 483s, and plants getting shutdown. What happens to your supply chain if your sole source for a key ingredient is shut down? Do you have a contingency? Have you effectively built in that backup plan for when plan A gets sidetracked?”

I follow up with a second betrayal of naivety. (But in self-defense, the question is also spurred by discussion we had in San Diego.)

“I expect there’s a lot of OTJ on the farm – on-the-job training. Do you believe in that approach for our biopharma industry?”

“Definitely, on the job training was pretty much what we had at the farm,” he replies.

Which leads Hughes to this:

“I remember one time my brother was instructing me on running a cultivator pulled behind our tractor. We had one particularly difficult-to-navigate corner of the field. He took me through the first pass, voicing instructions as he drove. ‘When you come to this corner, it's really tight. You need to watch the chain back here so it doesn't catch on the tire of the tractor,’ he instructed.

“Then he let me drive the second pass while he watched. Sure enough, I get up to that corner and I was too tight. The chain caught on the wheel, pulled the cultivator up and bent the main bar. He was not very happy with me – he had to spend the rest of the day in the shop fixing it. But my lesson was learned. I swore I’d never make that mistake again – I didn’t – and I think of that today when working with others.”

“Do those ‘others’ include CDMOs?” I ask.

And of course there’s an anecdote for that, too.

Throughout his career – which includes at emerging biotechs, Boehringer Ingelheim, and now Cidara – Hughes has experienced that “despite the best instructions and mentoring,” people make mistakes.

“It can be infuriating at times,” he says, “but those efforts at instruction are a crucial investment in people.”

“There’re some critical mistakes we can ensure we prevent because we have systems in place,” he says. “On the other hand, we can't prevent mistakes completely – we’re all human. And so we need to understand risks.”

“There are risks and mistakes that will impact timelines, or the entire business. We have to recognize those. But there can be a kind of value when mistakes occur, if we do not just sweep them under the rug.

“I just had an experience where, because of a lack of timely communication from a CDMO on the status of a particular method, it resulted in a lot of additional paperwork. Now, that's not going to impact us that much. But it could have impacted our timing to get a product set down on stability.

“I sent an email directly to the point person at the CDMO. I wrote, ‘Please understand what the impact on our end is of your not communicating in a timely manner. If I had learned this last week, we would have been able to make the changes we needed.’”

Which leads Hughes to this: “There's the old adage, ‘Praise in public but criticize in private.”

“Routinely, I reply to everyone on the project team to keep them all in the loop as things are managed. This helps ensure everyone who needs the information has ready access throughout the communication stream and timeline.

“But in this case, I only replied to the CDMO point person. And remember, we are talking here about constructive criticism in that correspondence. This is something to bear in mind, and I learned a long time ago.”

Back on the farm, we can be sure.