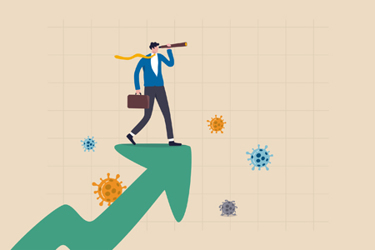 It has the feel of a leading indicator of where our industry is rapidly heading: There’s the elevated organizational level associated with that very specific science and technology.

We might even say Goodman himself has been a leading indicator.

He’s one of the still too few, but growing number of professionals with a tiered background (GSK; bluebirdbio)  in cell and gene therapy (CGT), now focusing on viral vectors. And in Goodman’s case, focusing on the outsourcing of which.

It’s no surprise Goodman landed at Vertex. It’s an indicator as well: an energetic enterprise accelerating from a once all-small-molecule platform to a growing pharma with a strong push into these newer modalities.

For those not altogether familiar with adeno-associated virus (AAV) vectors – most of us – these are increasingly viewed as the most adaptable viral-vector technologies. AAVs are engineered to provide specific and varied functionality in gene therapies; each new day seems to establish AAVs within clinical programs for a wider range of diseases.

Specifically, AAVs are a non-enveloped virus delivering DNA to target cells. The ability to engineer recombinant AAV particles without viral genes, but containing DNA sequences, is seen as a patient-safe strategy in gene therapy.

Spark Therapeutics' Luxturna is the first FDA-approved gene therapy for a genetic disease, and the first AAV-vector gene-therapy approved in the United States. Novartis’ Zolgensma is a second AAV-based gene therapy. A third, which predates both these, is Glybera. Its EMA approval expired in 2017 when uniQure decided not to renew market authorization. Glybera is now considered a very expensive commercial failure.

Despite that one early setback, industry experts anticipate we are at the cusp of a steady, AAV-vector-based, gene-therapy-commercial revolution. While the global market for all viral vectors is estimated in many reports to reach over $1 billion in the next few years, the AAV manufacturing sector specifically is expected to see annual growth near 50% over that time period.

I spoke to Goodman about all this, and as usual, focused our discussion on working with external partners to accomplish development and commercial goals.

But first he laid out his major responsibilities at this new position:

manufacturing, all of which is externalized; process and analytical development; and analytical technologies “around automation platforms, supporting Vertex’s entire cell and gene therapy portfolio.”

“I also wear a matrix hat,” says Goodman. “I'm CMC lead for our AAV program. I’m looking at all this from a program-strategy perspective, and how it trickles down to tactics and logistics, and the execution against that strategy.”

A Time To Innovate

“My recent experience before joining Vertex was oversight of CDMOs in the cell-therapy area, and not viral vectors,” says Goodman

The point is important. Mainly because his is a career evolution we can expect many others to follow. For our purposes, like Goodman, they’ll be bringing past outsourcing experiences to this new field.

Of his experiences working with many cell-therapy contract manufacturers, he says there’s always been the mutual feeling, “We’re learning together as we go along, from a technology and process perspective.”

Learning, as in innovating. From the perspective of the CDMOs entering the AVV space, there’s been a wide spectrum of experience. Some CDMOs are approached by biotechs needing an entire manufacturing process developed: ‘We received this from our research colleagues; we don't know how to proceed; please figure it out; put it in a GMP facility.’

The catalyst is the sponsor; the required innovator the CDMO.

Then you have companies like Vertex, strong on establishing process development capabilities in-house, but deciding to externalize the manufacturing. “In our case, we want the process run the way we designed it,” says Goodman.

But with either type of customer, says Goodman, CDMOs are learning. And in turn – within the restrictions of IP and NDAs, etc. – these service providers have been able to build upon that growing knowledge base and apply it to other customers.

“I think that innovation at the CDMOs can be described generally as incremental, if you will, but a number of companies do have innovation arms, some putting in the time and investing in innovation on their own,” explains Goodman. “Many CDMOs want to do that innovation through a client.”

And thus, the AAV (and other) service-provider base is growing (and improving). However, both CDMOs and sponsors need to be able to effectively parse this out. According to Goodman:

For the sponsor: “If I need a true innovator, I need a CDMO in that mold, versus finding one more productive at turning the crank, so to speak.”

For the CDMO: “Which model do we fit?”

Goodman says there’s no right or wrong strategy. The growing AAV-vector industry particularly needs that spectrum of sponsor and CDMO so everyone can continue to lean forward.

The multimillion-dollar question: Are there enough CDMOs and available capacity – either at less-innovative or more-innovative CDMOs?

“I'm in the thick of this now – the middle of a sourcing activity,” says Goodman. “I don't think there are enough strong, innovative CDMOs out there yet doing AAV work.”

Some, he says, have niche experience – stronger at developing baculovirus virus or HSV processes, and less so around triple transfections and those kind of scale ups.

A fair amount of CDMOs have started from a vaccine arm of their business, trying to translate that into gene therapy. “They're looking for clients who can help them build that bridge,” says Goodman

Regarding capacity? “Based on my recent assessment, there’s not enough capacity now, but there's a lot being built. It’s a mix currently.”

He anticipates an influx of capacity over the next year or so. “We know of several sizable investments in the vector manufacturing space.”

Meaning: more viral-vector outsourcing on the horizon – and more mutual learning/innovation. Ultimately, a harbinger of good things to come for more companies and their patients.