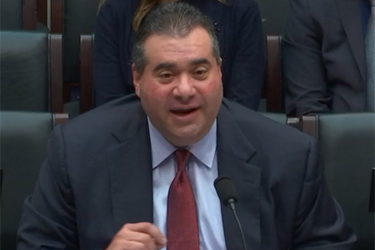 “The irony – and I tried to explain this to the Committee – is the same biopharma companies that come to me for clinical material don’t want to go to India and China because of quality issues, but then their API gets manufactured there anyways.”

The Subcommittee on Health, part of the U.S. Congressional Committee on Energy and Commerce, held a hearing on Wednesday, October 30, 2019, entitled Safeguarding Pharmaceutical Supply Chains in a Global Economy.

One of our own was called to testify.

If you ask me, they picked the right guy.

Decades ago, Edward Price founded his own contract development and manufacturing organization outside Boston. He kept it independent until last year, when he sold it to a Europe-based organization. He’s currently President and CEO, SEQENS N.A., a CDMO producing active pharmaceutical ingredients (API) in that same location.

He is on the board of governors of the Society of Chemical Manufacturers & Affiliates (SOCMA), and a longstanding member of that organization’s Bulk Pharmaceutical Task Force (BPTF).

I spoke with Price just days after his appearance in D.C.

If the Committee thought they heard it straight from Price – which they did – they should also study this “supplemental testimony.” You’ll want to as well.

A Path To Better U.S. Outcomes

Today nearly 80 percent of APIs are manufactured outside of the U.S. The question is what can the U.S. do to change that.

“To sum up, I tried to make the case that U.S.-based API manufacturers are over-regulated,” Price begins our discussion. “This makes it increasingly difficult for us to, for example, assist the domestic generic-drug industry.

“These agencies are coming after us because they are changing the rules – feels like they make them up as they go along – ostensibly looking to improve safety. But most of this in fact has nothing to do with safety. It's unprecedented overregulation that has been steadily increasing the last five years.

“If they really want to safeguard the pharmaceutical supply in the U.S., and they want to promote U.S. industry, we have to change three dynamics. First is that regulatory environment, which is choking us.

“Second, you have to change how our politicians deal with our school systems. I simply can't find enough people to staff my facility and grow my business. Eighty percent of my technical staff is foreign born – that’s out of necessity. (more on this in a second ediorial)

“Third, the increasing pressure from the government for cheaper generics means I can't compete. It’s more lucrative for me to work with emerging pharma. Clinical-trial material is the majority of what we do for a living. Which is ironic, because the same biopharma companies that come to me for clinical material don't want to go to India and China because of quality issues, perceived or real.

“These companies want to work with me; they’re willing to pay more. These are very complex and technologically advanced projects we work on with them, but the CDMOs that they don't want to work with in China are the same manufacturers supplying the United States with so much API for our commercial drug supply.”

GDUFA Good For What?

Price spent some time talking about the Generic Drug User Fee Amendments (GDUFA) – fees on the pharma industry put in place (starting in 2012) to provide the FDA funding to improve drug quality and reliability.

“Now,” says Price, “what's happening is it's coming to everyone's attention that there are severe shortages of pharmaceuticals in the U.S.” He wants the Committee to understand a main reason for that: “The U.S. has pretty much lost its API supply.”

“GDUFA was put in place to level the playing field,” he says. “One of the ways to do that was to increase inspections significantly. The FDA is collecting $300 to $500 million worth of fees from the industry to help promote additional inspections. But here’s the problem: Inspections have not increased proportionally to the fact that 80% of the APIs are manufactured overseas.”

“So the playing field is still not level. The FDA’s response is they have trouble hiring people, and they get stymied by foreign governments. For example, the Chinese won't grant visas so the agency’s inspectors can’t staff offices over there.

“At the same time,” continues Price, “Congress wants to push down drug prices. Okay, but in 36 of the last 38 months, generic prices have consistently decreased. In fact, generic prices are cratering, and generic manufacturers can’t make any money.

“Consequently, everyone is searching for cheaper APIs, which continues to push manufacturing overseas. And we're seeing quality and reliability further compromised.”

Towards the end of our “testimony,” and while still on the topic of generics, level playing fields, and pricing, Price says that since his Congressional testimony a few days earlier, he’s been thinking this all through again:

“Now, the Chinese or the Indians can make it for $200 or $300, because they enjoy all the advantages that they have.

“Why? Because it goes through the generic manufacturer, then the distributor, the wholesaler, then to the pharmacy, there’s a PBM [pharmacy benefit manager] … and everybody's marking it up. The API is only worth three to four percent of the final formulated price.

“So the difference between me and the Chinese is minuscule, compared to the difference between me and the formulated price at final sale to the patient. If you can take out some of those layers of non-value-add in the supply chain between the API and the patient, you can easily create enough value for the API. We could surely expand API manufacturing in the United States.”

Let’s officially enter this testimony into our record.

Reader’s can access a letter Price submitted prior to his congressional testimony.

Look for part two of my conversation with Price, in which he pulls no punches in accessing the school systems in the U.S