10 CDMOs, 2 Cancer Therapies, And An Eye On Analytical Services 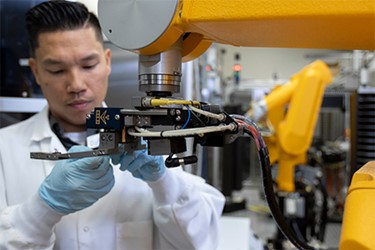 Vadim Klyushnichenko, VP Pharmaceutical Development and Quality at Calibr, a division of The Scripps Research Institute (TSRI), excels at the outsourcing of drug development and manufacturing, and the precise enumeration of those activities.

For example, in this chart he specifies the services he outsources for Calibr’s bispecific small molecule antibody conjugate (SMAC) program targeting prostate cancer, which is based on a “unique ADC-type structure optimization, enabled by unnatural amino acid technology”: 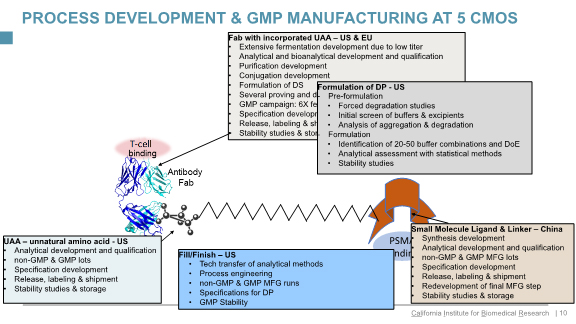 Once you’ve had a moment to input that roster of services – and note the geographic areas in which the services are rendered – take a look at the outsourcing for Klyushnichenko’s second project. As if the first isn’t complicated enough, this one is a program in the field of Car-T (chimeric antigen receptor) cells. Here’s what that chart looks like for this program (to date): 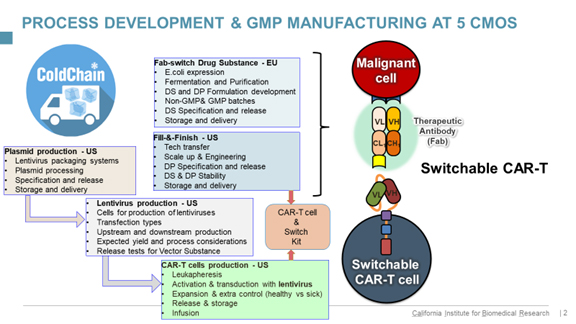 “As you see,” says Klyushnichenko, “we are dealing with multiple CDMOs – around ten at any given time. We’ve developed methodologies for handling the quality due-diligence process, and technical capabilities of CDMOs, in terms of analytical development, process development capabilities of drug substance, drug product specification and release, working together on time and budget, and final selection criteria.”

Common to all these activities is Klyushnichenko’s intense focus on the analytical-services aspects of his sponsor-service provider relationships.

That focus matches with what we’ve learned over the past year at Outsourced Pharma: There is a deepening importance – and concern – surrounding analytical services for sponsors outsourcing drug development and manufacturing. For example, the title of a session at one of our conferences this year is: “Your Entire Outsourcing Could Hinge On Analytical Support.”

So let’s hear what Klyushnichenko has to say on this subject specifically.

And he’s raring to talk on the subject: “I recently visited a CMO and asked, ‘If you don’t have enough analytical equipment in your QC lab, what are you going to do with all our samples?’ They replied, ‘We’ll outsource it.’ Well, I can outsource it myself! I don’t need to outsource to a CMO to outsource to another.”

Age of equipment concerns Klyushnichenko as much as quantity. He looks for the presence of older equipment in service-provider labs, which he says, ultimately leads to delays in sample analysis. Another “first question” of an analytical lab is how many HPLCs are on hand. “If it’s just one or two HPLCs, this will be a bottleneck later on, I’m certain.” 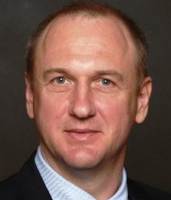 “Working on analytical development in early-stage projects, I see attempts to kind of mislead, for example, in terms of gel analysis. When a CMO says the gel is about ninety-five percent pure, how do they estimate that? Frequently it is just by eyeballing or estimating from an image. I’ve seen CMOs actually playing with images, with contrast and colors, to improve the quality of the gel.”

Here’s another example from his prior experience with a CDMO. “I know of a company that submitted a reference standard to a CDMO; the reference standard degraded at about ten percent per month. The CEO of the CDMO was declaring that based on the conducted process development, every month his scientists were improving the product yield by ten percent. Of course that was because the reference was degrading, and it wasn’t clear via the regular analytical methods. Fortunately, that situation didn’t last too long.”

Klyushnichenko is also weary of cost estimates for analytical development, particularly those that seem much too high, or way too low. “This is a clear indicator there may be some issues,” he says. “Perhaps they don’t clearly delineate or understand how to develop analytical methods, and what goes into development qualification and validation?”

“With stability studies particularly,” he says, “I frequently see that the CMO doesn’t list all analytical methods used. That’s to decrease the cost of the first version of a proposal."

He says it’s always important to talk directly to the head of analytical development at the service provider to get a good read on the situation. “I want to see if he or she knows and understands the magic words that FDA requires for method validation,” he explains, and then runs off this string nonstop: “linearity, accuracy, precision, specificity, range, LOD/LOQ, ruggedness, robustness. If the person can’t pronounce these five or six words, there’s no reason to work with this CMO.

“Another basic question for an analytical person is: What’s the difference between analytical qualification and validation, and when should they be implemented?”

Klyushnichenko frequently discusses with his CDMOs what methods will be used for in-process analysis, reference standard release and stability studies, and which methods will be conducted in-house or outsourced.

To simplify this task, Klyushnichenko has developed color-coded tables listing all required assays to be done in analytical development, quality control, and again, which will have an internal analysis or be outsourced. Here’s an example: 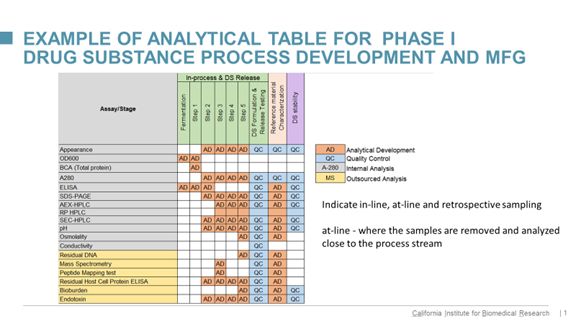 “For example,” he says, “an interim reference standard can be characterized at analytical development labs, and stability of drug substance conducted at QC. You can see where each method is done. It helps to set up the drug substance and drug product specifications. Working with multiple CMOs, I frequently see that specifications consist of the number of methods, but they are not connected, and sort of mixed all together.”

Finally for us, Klyushnichenko points out this slide regarding analytical support for his outsourcing: 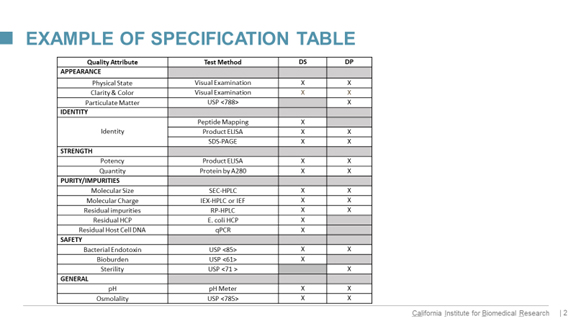 He comments: “To simplify the work with CMOs, we developed this type of template where all methods are separated into the category’s appearance, identity strengths, purity, safety, and general methods, followed by method description and various different ranges for drug substance and drug product. It helps to set up particular ways of communication with CMOs, and determine which method should be delivered at a particular time.”

And so there we have it: Two drug development projects worked on at 10 CDMOs, and held together with great care by analytical-services support. Regarding that support, Klyushnichenko has provided guidance on how to manage what has become an increasingly vital component for drug sponsors and their outsourcing in 2018.