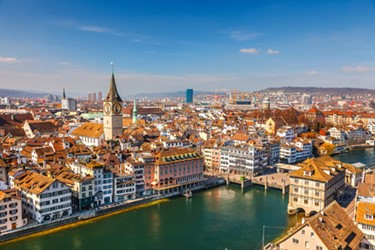 Tara Caiano of Biogen packed up her belongings from her Boston-area homestead to resettle in Switzerland. This “virtual plant manager” was turning the virtual into the physical, you might say.

Just a few weeks after she’d made the move, Caiano called me from her new office, some 30 minutes outside of Zurich.

I wanted to know: What is a “virtual plant manager”? I also hoped to learn more about her assignment overlooking an important external partner, and understand better Biogen’s evolving organization.

(In a separate article, Caiano will detail her experiences during her nine-year career at Biogen, as a millennial-aged female manager, in what remains a mostly male-dominated industry.)

What’d You Say Your Title Was?

The first question regarding her title draws a chuckle from Caiano.

“At Biogen, we've always had an External Manufacturing (EM) function. Some titles, though, are somewhat new,” she explains. “They reflect how we've more formalized the concept of a ‘virtual plant team,’ which is actually a cross-functional representation from Quality, Planning, Manufacturing Sciences, and other departments.”

Caiano clarifies that EM remains atop the supply-chain organization, and a “virtual plant” is a term for any CMO, packaging-services, or other external partner in the Biogen supply chain.

The cross-functional, virtual teams, she says, have an “internal version, and a CMO/virtual-plant-team meeting version.”

“The point of all this,” she explains, “is to move away from everything funneling through EM, where, basically, there is the potential for creating bottlenecks.”

Rather, “Quality from Biogen will connect directly with Quality from the CMO, and the same with Manufacturing Sciences (MS) and Planning. There’s more constructive one-to-one and back-and-forth. The person that runs the virtual plant team is called the virtual plant manager. And that’s me now in Switzerland.”

Caiano says Biogen hasn’t formally developed virtual plant teams for clinical operations, but because of a robust and growing pipeline, that may happen sooner than later. Currently, the teams are established for commercial products and/or based on material volumes.

Caiano resisted changing her title for a while. “I’ve finally succumbed to the title,” she says, “and happily explaining what it means when asked.”

Caiano relocated to Biogen’s Swiss office to be close to an important external partner. Within the biotech industry, she understands Biogen has an advantage because it can deploy the resources to manage an international supply chain, and make these kinds of location decisions.

Nonetheless, she ties the movements at Biogen to readers who may be at smaller companies.

“I know resources are short when you're a startup,” she empathizes, “but I still think it's crucial that CMO management comes from, so to speak, a non-biased group.”

She continues: “I think the biggest part of my job at Biogen is maintaining the overall relationship with the CMO. I can do this because I have all of the parts in mind, including quality, safety, production and planning. And while my main function is to represent Biogen to the CMO, I can also make sure the CMO’s needs are represented at Biogen.”

Even “virtual biotechs,” she suggests, should invest in creating a function where “the sole job is to manage the CMOs, and dedicate time to developing the relationships.”

“Organizations still take developing external relationships for granted,” Caiano laments. “Obviously, it's good to have technical knowledge. But a lot of this is human interaction. The CMO needs you just as much as you need them. When they see you're actually dedicated to that mutual cause, and their customer actually has a function that is ‘CMO management,’ it does help a lot.”

For her biggest challenge as a virtual plant manager, instead of pointing to the external partners, she looks inward.

“Making sure we are in fact all aligned as a company,” she begins. “So when we're presenting to the CMO, or are in various communications with them, Biogen is coming through as one voice.”

“Obviously, when you're working with a cross-functional team, you're going to have a difference of opinions,” continues Caiano. “Getting everyone aligned is the tricky part. Almost none of these resources – internal and of course external – report to you directly.”

I ask: If an issue comes up with one part of the quality team not performing well, or there are certain services you need done but aren’t receiving, how is that handled?

“Well, it's funny,” starts Caiano, “because it’s handled the same way internally as we’ve been talking about with CMOs – it takes relationship skills most of all. You have to practice these skills with your own cross-functional, virtual-plant teams as well. If you're able to get Quality and MS – and their management – on board early, with what needs to be accomplished and what the objectives are, it's easier to always reference that as the project develops.”

“I’ll say this,” she concludes. “I definitely do not like escalating above people's heads. I always first try to develop a good relationship with each of the cross-functional members. If I'm still having an issue that I can't resolve with just them or the team, then at that point of no choice, really you can only escalate to their management. But it is a last resort.”

We’ll end this first part with Caino here. Perhaps by way of summing up, we can enforce this: Despite titles and strategies for drug development and manufacturing outsourcing, it appears “real” relationships will always drive execution and success – both external and internal.