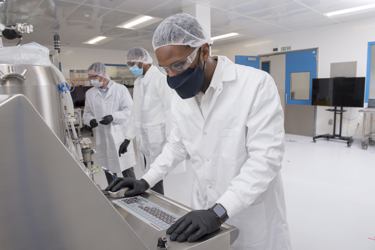 I wanted to learn more about the biopharma manufacturing training program at Thomas Jefferson University’s Jefferson Institute for Bioprocessing (JIB).

To answer my specific questions about who in the industry the Philadelphia-based JIB was already assisting, they sent me to California.

There I found Dr. Robert Johnson, COO and Scientific Advisory Board member at GenVivo, Inc., an L.A.-based biotech, currently with 45+ employees and some internal manufacturing capabilities. (More on those capabilities and outsourcing strategy subsequently.)

GenVivo is developing gene therapies to treat cancer by “synergistically killing tumors,” activating the immune system, and integrating “novel companion diagnostics.” Its lead program is completing a phase one trial in patients with hepatocellular carcinoma or tumors metastatic to the liver.

My interest in university-based training was piqued again (see below for earlier editorials) by the announcement JIB received a $2 million state grant to add 20,000 square feet of academic and training space, matched by an equal investment from the university.

“It's hard to find individuals trained specifically for our part of the industry – cell and gene therapy/vector production,” Johnson says via a Zoom call from his car, parked somewhere off of I-5 in L.A.

His is a long career in the industry, including Merck (“During their most admired years under Roy Vagelos”), Chiron, Kosan Biosciences (acquired by BMS), and his association with start-up biotechs.

He began with a MD/PhD in Biochemistry and Biophysics from the University of Pennsylvania School of Medicine, and clinical training at Massachusetts General Hospital. Johnson joined the Howard Hughes Medical Institute, and was appointed faculty member at Harvard Medical School. Subsequently, he went back to Penn as an Associate Professor of Medicine and Biochemistry, Biophysics, and Physiology.

“To keep our industry going, other institutions training students for process development and manufacturing will have to establish these types of centers as well,” he says.

“I think Parviz [Dr. Parviz Shamlou, Jefferson University Vice President, and JIB’s Executive Director] has been ahead of the curve reaching out to colleges to build clean rooms containing state of the art equipment for training students.

“Since the era of Genentech, our industry has been making peptides and proteins, and then monoclonal antibodies, all pretty much the same way.”

“But making products by manipulating cells, ex-vivo, the whole ability to make vectors at large scale and with the right kind of purity; that all requires new kinds of technology, and thinking.

“That's how I originally got involved with Parviz. We were both here in Califorinia, and he was doing somewhat the same type of training at the Keck Graduate Institute.

“Part of our vision was figuring out how to train the next generation of leaders for this revolution.”

Johnson credits the entire institution at Jefferson University for getting behind the JIB vision.

“I was there for the opening of the facility,” recalls Johnson. “University President [Dr. Stephen] Klasko was there; there were at least three trustees I talked to.”

“It’s a well-backed, broad-ranging vision. The Philadelphia location puts them in the middle of Big Pharma, and a growing cell-and-gene industry.

“Allow me to add: In many respects, thanks to Professor Carl June at Penn, the area is a hotbed for cell and gene companies that have come out of academic institutions there, much like what happened here in California for the recombinant protein therapies.”

Very informative. But I’m looking for some hiring specifics, I tell Johnson.

“The first individual we hired out of the JIB program is a good place to start – actually a fantastic story of diversity and excellence,” he replies.

“Her parents came from Mexico. She was the first to attend college – UC Berkeley – as an Integrative Biology major. She then got her Master of Science in Biopharmaceutical Process Engineering degree with Parvis at JIB.

“She's now one of our outstanding young people. As an Operations Development Associate she has the opportunity to rotate through our process development, manufacturing, and quality departments.

“She’s been taught to think forward; not the way things have always been done. And don’t forget, JIB is only a couple years old; she was in the first graduating class.”

“I'm always asking my contacts who they're most impressed with, who are their best graduating students.

“There are good training programs out there. However, none have the depth of practical hands-on cleanroom GLP and QC experience that JIB offers and is expanding upon in cell and gene therapy/vector production.”

“Recruiting for this skill set is so important. We started a summer program for students – similar to what a lot of bigger companies do.

“Last year, we ran a program for students who wanted to take off a year between their first- and second-year master’s programs, to do a co-op at our company and get an idea what the real world's like, but also to give us a jump on recruiting them. They can learn how well the industry operates, the benefits and rewards of working in biopharma, and the excitement of working with cutting-edge technologies and treatments.”

We’ll end this first part of my discussion with Johnson summing up (slightly edited) the ultimate value proposition.

“First, students come out of the JIB trained on the absolute cutting-edge equipment, with the specific skill set needed in the industry today.

“Second, I can send our employees to JIB for training on that equipment. Even if we don't have it  at the moment, we may in the future, and we can now have a working familiarity if we need to utilize that equipment at a CDMO.

“Third, they have really smart students in need of projects. For example, we can provide some of our feed-stream to them to work things out for us, and then bring it back into our company along the way.

“Fourth, compared to going to outside commercial sources for help, the costs are more reasonable. For example, JIB is able to scale-up GLP-grade lots for pre-clinical testing if we don’t have the capacity.

“Overall, this is just a great recruiting tool. If students work on your project, you have a heads up on attracting them ultimately.

“Based on their training, there's not the problem of conventional thinking. They are willing to take on something that to a seasoned veteran may not make sense, and succeed.

“Finally, don’t forget we have the benefit of the faculty as well – they are there because they want to innovate.”

In part two, we’ll apply this directly to outsourcing/insourcing, and the need for workers at CDMOs as well.

Who Wants To Work At A CMO Anyways?

Are There Enough Biomanufacturing Workers In The U.S.?

Inserting The Pharmacist At The Center Of Biopharm