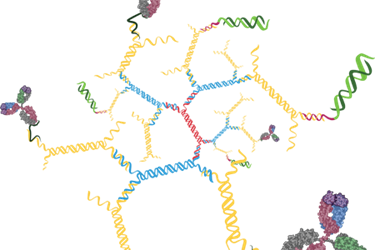 No disrespect meant to Tom Bliss, veteran pharma and bio executive (e.g., Amgen, Baxter, Kyocera), and most recently CEO of platform-biotech Genisphere LLC, nor James Kadushin, 22-year veteran and (retiring) VP Operations / COO at the company, but as I spoke to them recently I kept recalling Chicago’s iconic 70s rock song, “25 or 6 to 4.”

That’s because Bliss and Kadushin were detailing for me how Genisphere went from an original list of “35 or 6 candidate CDMOs to 2 selected” as their development and manufacturing partners. Their description of that process should be music to the ears of any biopharma undergoing or about to go on a CDMO search.

By way of lineage, Genisphere traces back some 22 years, originating as a reagents business for life science and diagnostics, and establishing itself as a leader in signal amplification technology. When acquired by Datascope (Getinge AB) in 2009, a management-led spin-off brought with it IP that included 3DNA nanotechnology for applications in life science, diagnostics, and targeted drug delivery. Today, Genisphere LLC is a platform biotech, working with customers and partners on targeted therapeutics, and advancing its own candidates to the clinic.

According to Bliss, Genisphere is “the first commercial source of highly targeted DNA-based nanocarriers.”  The company has conducted studies of DNA-binding drugs, and small molecules linked to DNA, for use as cytotoxic treatments. Genisphere has established several key collaborations to perform in vitro and in vivo evaluations of various combinations of targeting conjugates, and payload conjugates, on its DNA-nanocarrier, trademarked “3DNA.” Bliss tells me the company is a year or so out from bringing its first candidate(s) to the clinic; part of that decision/timing is contingent upon raising capital.

“Early in our transformation, we faced the classic build-versus-buy decision for the continued manufacture of our core technology, 3DNA,” explains Bliss. “We didn’t want to build infrastructure that already existed, and if we could find it, we could make a more compelling case for our investors.” A broad-brush analysis showed costs upwards of $25 million to build out a GLP/GMP facility to produce “relatively small volumes for that sized investment.”

Which is our segue to the CDMO-selection process.

Step 1 – Bring In The Advisors

Kadushin, who after 22 years at Genisphere was on the cusp of his retirement when we spoke, recalls that with the decision to look for a development and manufacturing partner, he set out with a list of over 35 candidates. “That’s obviously a pretty wide net initially,” says Kadushin. And so, adds Bliss, “The first thing we did was reach out to talented and experienced biopharma veterans we’d worked with in the past. I’d recommend anyone in a similar position do the same.”

“We decided to interface with a production person, a quality person, and a QA/QC auditor,” continues Bliss. Namely, they were: Paul Marshall, who had been COO of Amylin Pharmaceutical (now retired); Don Baker of Baxter; and Jan Fang, a Pfizer and Amgen alumni, who ultimately played an especially key role in advising Genisphere.

“We thought we were a little early to utilize an operations person, but it was certainly the ideal time in the project and CDMO selection to engage Jan Fang specifically; she became a great partner to Jim [Kadushin],” says Bliss.

One reason for that elevated importance – and a subject we will take up separately in a second part to this editorial – was the winnowing down of potential CDMOs was leaving Genisphere with mostly the larger, established players in the running. Could a small and unproven biotech have any leverage in negotiating with the big guns?

“We started early in 2016,” recalls Kadushin. “It was an intense period. One of the major gating issues as we went through the initial list and had conversations with their product development and project management groups, was technical capabilities with respect to the ability to manufacture a product that contains nucleic acid DNA.

“Of the initial 36 or so CDMOs we engaged, roughly half eventually dropped out simply because we or they thought that after some discussion, they just wouldn’t be technically in the right spot, if you will, to manufacture our product. Unfortunately, with many in the other half, we would find later on in the process that they talked a good game, but really couldn't come up with either the onsite experts, or they simply didn't have the technical chops to handle our technology.”

Genisphere was subsequently left with about a dozen companies where both sides agreed they had the requisite development and manufacturing capabilities. From there, further conversations and face-to-face meetings were conducted, and the list was whittled down to a final handful, from which Kadushin and company selected the two companies that they continue to work with today.

“Somehow,” concludes Kadushin, “we got that done in roughly six months, but couldn’t have done it without the advice of our experienced experts, who knew how to work with big and small CDMOs.”

A “lesson learned” that Kadushin offers Outsourced Pharma readers: Tighten up the RFP.

“We spent a lot of time going back and forth on the proposals that the CMOs initially provided us for the development and scale up activities, and the manufacturing of GMP quality material,” explains Kadushin. He says proposals came back “overstuffed with ancillary processes or items we didn't feel were appropriate at that particular time.” This then required “a fair amount of negotiation to eventually arrive at proposals that did work for us.”

“To be honest,” concludes Kadushin, “we could have saved valuable time if we were better versed at Genisphere at understanding what are our short-term, versus midterm, versus long-term goals. We were novices at developing and manufacturing pharmaceutical material, like a lot of biotechs. So spend the extra time upfront on the RFP. It will pay off in the end.”

Genisphere’s was an international search, including the U.S., Europe, and Asia to an extent. Roughly a third of the candidate partners were international in either operations, or at the least maintained fully staffed international business development or other presences within the U.S.

For its final choice, Genisphere selected two established multinational CDMOs, one based in the U.S., and the other in Europe. “Going into this, we decided we were more than willing to consider working with a non-US based company, if we felt that they were the best contender,” says Bliss. “And even though the Europe-based CDMO has a significant footprint here, we do work on a regular basis with their group in Europe. You have to be committed to making that work.”

In the end, a start-up biotech with novel technology winnowed down a long list of candidates to take on two large and established CDMOs as critical partners in development and manufacturing. Would these relationships work? Would Genisphere have any leverage if push ever came to shove? We’ll take a look at that in our second verse.

Image accompanying this article is from Genisphere, described as “2layer with antibody and siRNA.”