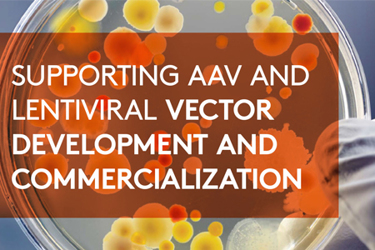 Plasmids are essential for the development of viral vectors used to manufacture novel gene therapies and viral vaccines. Aldevron is supporting the innovation of drug developers in this space by providing standardized royalty-free, bulk AAV helper and lentiviral packaging plasmids for research and GMP production.

Plasmids are circular DNA molecules found mainly in bacteria, but also in yeast and plants, that replicate independently from the host’s chromosomal DNA and enable bacteria to transfer genetic information from one to another via the process of horizontal gene transfer. They may also serve other functions, such as imparting antibiotic resistance. Natural plasmids contain an origin of replication, which controls the host range and copy number of the plasmid and allows initiation of replication. They also generally have at least one other gene that facilitates bacterial survival. Engineered plasmids are designed to introduce foreign DNA into other cells — typically mammalian cells during biopharmaceutical manufacturing. This process is referred to as plasmid transfection. Like natural plasmids, engineered plasmids (also referred to as vectors or constructs) with specifically inserted genes have an origin of replication and a selection marker (e.g., antibiotic resistance to allow for the selection of plasmid containing bacteria) and cloning site(s). Expression plasmids also have promoter regions that determine which cell types the gene is expressed in and the amount of recombinant protein produced. Once the desired vector has been created, it is transformed into bacterial cells that are then selectively grown on antibiotic plates. The type of plasmid — cloning, expression, gene knockdown, reporter, viral and genome engineering — dictates the end-use application, including the production of viral vectors for gene therapies and viral vaccines.