University of Haifa and Rambam Healthcare Campus yesterday unveiled a strategic partnership and plans to develop a $100M plus, twenty-story ‘Medical Discovery Tower’ during a special ceremony in Haifa, Israel in the presence of the Israeli Health Minister and Finance Minister.

The medical research tower, developed with the support of the Israeli government, will be built at Rambam’s campus in Haifa to create and foster an environment fueling investigation, discovery and innovation, advancing the prevention, diagnosis, and treatment of disease.

“This groundbreaking partnership will translate research expertise into novel therapies for the most critical global human afflictions,” said Karen Berman, CEO at the American Society of the University of Haifa. “But this collaboration goes beyond building on our expanding research capabilities. Combining the efforts of these two leading institutions provides an opportunity to leverage philanthropic resources to transform healthcare at the local, national and global level.” 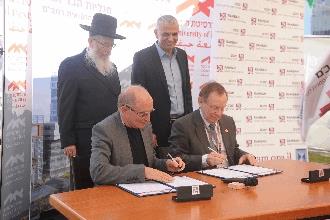 The research activity in the Medical Discovery Tower will offer a close connection between the clinical field, research and development. It will also link the University researchers with the necessary clinical resources, such as imaging devices, genetic testing and the advanced equipment system currently in the hospital compound. This will lead to a significant shortening of the time required for achieving innovation in the life sciences industry.

Six consecutive floors of the twenty-story Medical Discovery Tower will be allocated to the University, where it will carry out a multitude of research projects in conjunction with Rambam Hospital, who themselves will have a further six floors dedicated to its own activity. A further two floors will be assigned to the Technion-Israel Institute of Technology.

The tower will also provide state-of-the art facilities for the interaction between the innovative biomedical and medical technology industry in the city of Haifa, harnessing drug and device development from start-ups and established companies, encouraging scientific exchanges and fostering national and international collaborations.

“This is a unique approach to philanthropy that sees two complementary organizations work hand-in-hand to have exponential impact and better the region, rather than compete with one another,” Berman added. “At the same time, the University is excited to have a physical presence on the Rambam campus. This building is another step in the University’s expansion and development of Haifa and northern Israel, positioning the University at the forefront of the region’s growth.”

About University of Haifa
University of Haifa is a world-class university dedicated to academic excellence and social responsibility. The University expands educational opportunities and upward mobility for all members of society, secures and stabilizes the north of the country, and serves as an example of tolerance and coexistence in Israel and the entire region.