Do The Math: No Shortage Of Vials For COVID-19 Vaccines 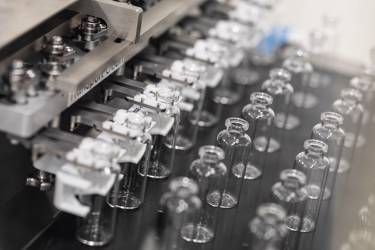 Supply-chain risks for Outsourced Pharma readers can start at the sourcing of raw materials, and run step by step – intermediates, API production, and culminating in concerns for sustained production at commercial.

With vaccine development for COVID-19, though, the concern seems to jump from accelerated development directly to the glass vials needed for global distribution.

For step one, there’s much science/technology, data, analysis, competition, estimates of timing, and hopes and concerns.

For step two, there’s mainly this: Will there be a shortage or not?

“First,” he says, “only considering our own operations, we are increasing glass tubing capacity [from which glass vials for pharmaceuticals are formed] by 40,000 tons by 2025, as part of a $1 billion investment for pharma-directed production. Calculated into dosages, that means close to 7 billion containers.

“We are also increasing our capacity in the second value-chain step – the hot-forming process that actually creates the vials. There’s been much talk about a shortage because of worries over this production step.”

“There are roughly 150 vaccine projects today where virtual biotechs to Big Pharma are trying to develop a global product to fight the coronavirus,” Stocker begins.

“The worst-case assumption at this time is the world could require in the range of 2 billion dosages in 2R vials [2 ml injection vials].”

A recent press release stated SCHOTT alone could actually produce the 2 billion doses for COVID-19 by the end of this year, if vaccines were ready.

“However,” Stocker continues, “a more common consideration is for a larger-dose delivery per vial, more like a 10R – 10ml injection vial – for a multi-dose.

“If you consider a 10R vial, we might get 5 dosages out of 1 vial. So let’s divide the 2 billion estimated dosages by 5 to bring us to an overall need for 400 million vials.

“Now, if you believe all 150 COVID-19 vaccine-development programs will be successful and all require 400 million vials – like it appears too many people are doing when they say there will be a shortage – yes, you arrive at an untenable number.

“Those who understand drug development, though, know to bring one drug to market you roughly need 1,000 candidates. That's the probability of success.

“Taking those 150 projects, and multiplying them by this probability of success, leads to this logical last point: Only a few of these 150 vaccines will end up as commercial drug products.

“For those, the glass-vial capacity is certainly there.”

Comments To The Contrary

Nonetheless, quite a hullabaloo was raised when folks (many who should know better) misinterpreted comments made by SCHOTT’s chief executive in a Reuters article:

“[Chief Executive Frank] Heinricht said Schott had turned down requests from major vaccine developers for future delivery of 800 million to 1 billion glass vials, which typically hold 5-10 doses, because the company believed it was too early to make such a commitment.

“‘We have to keep the door open to give capacity to those who really are successful in the end...” Heinricht said.

“[He] said the industry supplies about 50 billion medical borosilicate containers per year, of which 15-20 billion are medical vials, even without a pandemic. The glass type is favored by the pharma industry because it does not react with contents.

“Schott and its peers will manage to add about 1 billion vials likely needed for a global immunization effort, he said. That would require a vial to be used for multiple injections.

“‘The day a vaccine nears approval we will be ready and I am certain that not only we but also our competitors will deliver,’ said Heinricht.”

Dire predictions these are not.

The above Reuters article began thus:

“Drugmakers are warning of a potential shortage of vials to bottle future COVID-19 vaccines, but their rush to secure supplies risks making matters worse, some major medical equipment manufacturers warn.”

That’s the context in which Heinricht was replying. I’d suggest his reply was more corrective than concerning.

A Wall Street Journal article unequivocally stated there is a “glass shortage.”

“Medical glass had been in shortage for several months. Now major makers such as Corning Inc. say drugmakers and governments are making big moves to line up supplies for Covid-19 vaccines. Johnson & Johnson alone bought 250 million vials. Schott AG, one of the world’s biggest medical glassmakers, says the requests it has received for a billion vials are double what it can produce this year.”

Even some CDMOs entered the shortage-suggestion mix:

“’Everybody who’s making a vaccine wants access to the vials,’ said John Chiminski, chief executive of Catalent Inc., a contract manufacturer making vaccines for AstraZeneca and other drugmakers. ‘Where’s all that glass going to come from?’”

One answer: From the glass makers.

In June, SCHOTT announced it “reached agreements with leading pharmaceutical companies, including partners of ‘Operation Warp Speed’ – the US government initiative to serve local vaccine production needs. The agreements become effective immediately and first vials are being delivered to companies in North America, Europe and Asia.”

Other leading – and some lesser – glassmakers around the world have similarly publicized positive production news and contracting developments.

I’ve brought this discussion to Outsourced Pharma readers as both corollary and cautionary.

Our industry in normal times can gyrate from one imminent supply-chain threat to another.

The advent of biologics itself enticed production-capacity scares on a global scale.

It seems each new technology – ADCs for example – is met with supply-chain concerns.

Most imminent today: A lack of viral-vector production for cell and gene therapies.

These concerns may be well founded. Having them voiced can also spur corrective action.

I’d submit the supply-chain threats emanating from China, as the communist party there tightens control of that country, are not over-hyped.

So there are corollaries to today’s supply-chain concerns. We are not in “unchartered” waters.

The cautionary side for readers is this:

None of the above concerns should tamper enthusiasm or slow down efforts in pursuing your own development programs.

If Outsourced Pharma readers will be in need of glass vials for development or manufacturing programs, move forward as we suggested in part one of this editorial (Your CDMO And Your Glass Vials: Best Practices For Development):

Talk to your CDMOs, and bring the vial providers into the early discussions to plot development and production strategy. The glass is there.