The Biggest CDMO Show On Earth 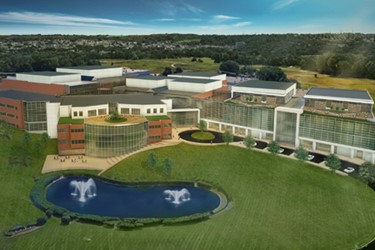 “Come one. Come all. See The Biggest CDMO Show On Earth.”

I suppose it was inevitable.

After years of escalating one-upmanship in the CDMO industry (e.g., “the only one-stop end-to-end global CDMO”), it was only a matter of time before we got the ultimate, “biggest CDMO on the planet” announcement.

And quite an announcement it is.

It includes: a center for breakthrough medicines, discovery labs, a colony, a King of Prussia, and a 30-month campaign to raise an army of 2,000 foot soldiers, all funded by a “specialty investment company” to the tune of $1.1 billion.

The mission: To (absolutely once-and-for-all) “alleviate the critical lack of capacity that is preventing patients from accessing critically needed cell-and-gene therapies.”

So I asked for and received more details for Outsourced Pharma readers, from Audrey Greenberg, co-founder, Board Member and Executive Managing Director for The Discovery Labs (see below).

She provided me more specifics on the new CDMO, including a particular interest we’ve been pursuing here at Outsourced Pharma:

What equipment, processing and manufacturing set up is needed in a new cell-and-gene service facility, and exactly what services need be offered?

For direct reference, the January press release is here.

Before we get to our discussion with Greenberg, for clarity I’ll quickly define the top five players (there are more). Also, based on my personal experience with large, economic development deals, I’ll add two players I believe must have or will have a role.

1. The Center for Breakthrough Medicines – the name of the CDMO to be built and outfitted, described demurely as: “The World's Largest and Most Advanced Single Solution Cell and Gene Therapy Contract Development and Manufacturing Organization. Period.”

3. King of Prussia, PA – no, not a real king as alluded to above, but the Philadelphia-area location of a prototype for a global rollout of The Discovery Labs.

4. THE COLONY – yes, sort of as described above: a gathering of custom built discovery labs, “breakthrough funding” for research agreements, including housing for the world's leading “iconic experts” in cell and gene therapy. THE COLONY (colonial in its insistence on all caps), will be established by The Discovery Labs and adjacent to the new CDMO.

5. Deerfield Management – the financers, described as a management firm for advancing healthcare through “investment, information and philanthropy.”

Not Listed in the press release or mentioned by Greenberg, but again based on my assumptions:

More On Equipment And Timing

To be clear, this is how I’d summarize this:

A to-be-constructed/outfitted CDMO has signed a lease for a 680,000 square-foot facility [aka the biggest in the world for its purpose] in a “prototype location” that plans to employ 2,000 PhD-scientists, manufacturing experts, lab technicians and support staff within 30 months.

So while one and all cannot actually come and see the show just yet, biopharma companies are being told: Tickets for capacity and services starting the end of this year are now on sale. (I point this out because the press release seems to confuse present and future tenses at times.)

The Center for Breakthrough Medicines plans to provide customers from early stage through commercialization, once up and running:

“We’re investing in the latest technology to provide our clients with the most up-to-date manufacturing equipment,” says Greenberg.

“We will deploy single-use bioreactors for suspension and anchorage-dependent processes, including pall, iCellis, GE Xcellerex, Sartorius, and Thermo technology.

“Downstream bioprocess will be heavily reliant on novel resins and single-use columns.  State-of-the-art analytics and fill-and-finish technologies will also be provided.”

“The Center for Breakthrough Medicine is located at The Discovery Labs King of Prussia, which includes a former GlaxoSmithKline West campus. We are renovating the massive 1.6 million square feet site, and beginning construction of the CDMO immediately.”

I asked for more on timing.

“The first suites will be completed later this year, followed by commissioning and qualification,” replied Greenberg. “Of course, exact timing will be based on the process and client requirements.

“Beyond this year, we anticipate standardized spaces to be delivered every six months thereafter, until the facility is completely fit out.”

In total there will be 86 suites – 36 for cell therapy processing; 10 for plasmids production; 20 for viral vectors production; and 20 for testing, process development and cell banking (or the storage of live cells needed for future batches).

Greenberg explains the suites will have a modular design, “so they can adapt to a changing client base and future advancements in production.”

More Than Equipment And Services

But Greenberg has more than equipment on her mind. She’s also focused on THE COLONY. I’ll remind readers this is the planned co-location of custom-built discovery labs, fueled by funds for research programs, housing, and the hoped-for relocation of “the world's leading iconic experts in cell and gene therapy.”

As I recently wrote regarding separate, announced plans for a cell and gene CDMO led by Harvard and a cast of others in the Boston area:

“Harvard and company deserve kudos for bringing together [at one location] the various players – universities, hospitals, drug and therapy developers, CDMOs, and equipment providers – all to serve a localized biotech community, and ultimately patients.”

Those same accolades apply here, but the difference of course is scale: Greenberg and associates are building and thinking big. Real big.

Finally, but of immense importance to our drug development and manufacturing outsourcing industry, there’s a second sentiment with echoes from the Harvard – and indeed other recent – news:

The U.S.-based CDMO, newly catalyzed by the need for emerging cell and gene therapy support services, is again on the rise.