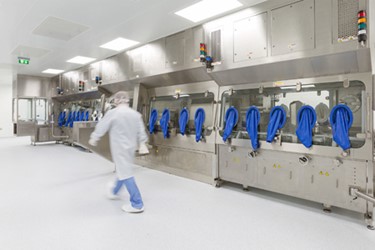 In 2005, a couple of guys in Waterford, Ireland, said: “There’s not enough high-potency, high-containment facilities in the world. Why not build one?”

One of those “guys” was Patsy Carney, CEO of what is now EirGen Pharma (also see part one). From the start, the focus of the facility has been on developing and producing innovative generics.

Carney and crew faced these challenges:

Other than that, what could be so easy?

Carney and company were realistic, but remained undaunted. “There were regulations coming out of Europe and the U.S. Companies were getting scared, because the regs were calling out the need for dedicated facilities to handle HP compounds,” he recalls.

“Existing generic players were making high-volume products in big, older facilities. They realized with new niche products and markets coming along, they weren’t going to be able to adapt. We took a look at it, put a business plan together, and raised the cash.”

That included $3 million primarily from the founders own seed capital, a few private investors, and support from government agency Enterprise Ireland mostly for the fit out of the new facility.

The initial capital raise was completed by December 2005, work commenced on the fit out in March 2006, a HPRA (Ireland’s regulatory body) approval was in hand by August 2006. Altogether, in short order, a facility with a focus on high-containment products was built and operating.

The facility was relatively small at approximately 10,000 square feet, “but given the fact the niche products we were targeting were small – both in tablet size and volume – the facility size had the right balance for both R&D and commercial supply.”

“Our focus was oral solid dose (OSD) tablets and capsules. We were agnostic to geographic market, because we’d had years’ experience through Europe, the U.S., and other markets – we even bolted on the Japan market. We thought, ‘Build it to a high standard and they will come.’”

The business model was “we’ll do the development, source the API, perform the bio-equivalent studies, get the filing ready, deal with all the regulatory queries. We’ll fund most of that ourselves to reach an actual finished product. After that, we’ll need the commercial partner who has the wherewithal to take it to market.”

I ask Carney how EirGen decided on which generic lines to innovate?

“Pure, dogged research,” he replies, “in terms of looking at the patent landscape, what was coming out, at macro trends in the industry, and where we saw the therapeutic indications getting narrower.”

At the same time, drug potency was rising throughout the industry, and per-unit dosage was heading down to microgram quantities. “Our funnel filtered to about 20 potential candidates,” says Carney. “Then we asked: ‘Who’s offering these APIs today?’ That sent us around to contacting some potential clients early on.”

“In the beginning, we had a shell of a building, but a really good PowerPoint presentation,” Carney says with a laugh. “And in March of ’06, we closed a deal to develop an oncology product we committed to start development on that September.”

The product was  Anastrozole, an anti-hormonal breast cancer drug. The customer was a U.K.-based generics maker looking to add to its portfolio in the U.K. market, “a most difficult market in terms of pricing.”

“It was hard for companies to make money with new Indian and Chinese suppliers coming in … prices were getting hammered,” explains Carney. “But we found this niche the customer could operate in. That’s why we were attracted to them.”

This success was followed with a South African-based customer, and EirGen’s first U.S. client. “Before we knew it, we had three or four projects, where also there were synergies across the projects, because we could develop it for one client for Europe and another for the U.S. There were milestone payment arrangements; we took these to actually file the ANDA, or we filed it on their behalf. On approval, we provided the commercial products.”

Carney says similar “innovative” players in that space were mostly offering development services of customer-generated products, and wanted to hand the commercial supply responsibilities back to the client company.

“With these kinds of innovative, niche compounds, that’s no use,” he says. “Customers were outsourcing because they didn’t have the right facilities, as I mentioned a moment ago.”

Today EirGen supplies product in 50 countries. Still, Carney makes clear that his model breaks down “unless you got the right partner on the backend marketing/sales and distribution side.”

Editorial interjection: I learned early on in my career (see The Middle Seat In A Supply Chain for a brief anecdote) there are parallel lines of customer-provider reliability. The first is of the actual product – with quality and supply being paramount. Price is also always a consideration.

The second is “relational reliability” – can both sides of a business relationship be confident enough to invest time, funds and/or research in each other? Do they work well together on a unified strategy?

But in this case – the generics industry – I thought price would be the first imperative. Carney saw it differently.

“Price is important, but price is like an elemental ‘hygiene factor,’” he says. “You’ve got to get past that first. You have to perform the work or supply the product cost-effectively.

“But the most important challenge is reliability of supply. You can be the cheapest supplier in the generics field, but if you don’t have absolute certainty of supply, you’ll get butchered.”

He continues: “Over the years we’ve had our moments – for no fault of our own – where we hit some supply issues. That’s when it gets hairy; that’s when the supply chain reacts. If you damage the certainty of supply, that’s far more serious than whether you happen to be the absolute cheapest generic on the marketplace.”

Carney sips from the same stream of thought on relational reliability. He says the long-term relationships that have worked best for EirGen are those that “from day one, the relationship is transparent from the point of view we both realize we are trying to make money on this relationship.”

He continues: “We lay out the responsibilities from the sourcing of raw material all the way to supplying commercial product. We clarify who’s responsible and who’s paying for what, so we don’t end up with a row about money that can damage the relationship.”

He’s also a proponent of building personal relationships from top management down, and of “face-to-jowl meetings,” despite any long distances involved.

But there are relationship challenges.

“In all due respect,” he says, “the problem with some Big Pharma is, for example, there will be three of us getting on a conference call for a development project, and there’s 30 of them on the other end! It’s the only project they work on, and they start hanging out here. Yes, we make a nice return, but mother of god, how many more phone calls and site visits are we going to have? So my advice is: Be careful what you wish for.”

For Carney and EirGen, so far most of their wishes have been spot on, and come true.