Perhaps because today some political currents in the U.S. flow in the opposite direction, early in our discussion of his newly formed organization, Civica Rx (Civica), President & CEO Martin VanTrieste proclaims, “I am a capitalist.”

You’ve read that correctly: by the end of 2019. A major role in this supply chain-to-come will be CDMOs. We’ll tackle specifically how those relationships will come together in part two of this article next month.

First, VanTrieste explains the market challenges, and the relief his new organization and partnerships will bring to patients. He believes Civica has uncovered a business model that is “pro-competition,” and one that others throughout the biopharma industry can adopt as well. VanTrieste, who after 35 years in the biopharmaceutical industry recently retired as senior VP of quality at Amgen (he is also the founder of RX360, another nonprofit, international supply chain organization), says: “My whole life, if I look at a problem, I break it into its smallest potential components, and solve one part at a time. The part of the healthcare challenge we’re focusing on is accessibility problems hurting hospitals and causing adverse consequences on patient health and safety.”

My first questions to VanTrieste — posed on the day this past April that Civica opened its new headquarter offices in Lehi, Utah — were these:

“Are the shortages of common generic drugs that healthcare systems face daily caused by the actions of various free-market enterprises working to maximize profits? Or because the drug markets in the U.S. are decidedly not capitalist in nature? Or is it unfair competition and reliance on China or others outside the U.S.?”

He replies with a soliloquy on shortages: “To me, this is all about economics. These drug products have become commodities. If individual companies have the choice between continuing to manufacture a commodity or something with higher margins, they often move to the latter. For those suppliers who remain in the ‘commodities’ business, they need to continue to cut costs to stay competitive. That’s when people go to China for the lowest prices. But then they put pressure on the Chinese suppliers to cut their costs even further, and things start to break down in this long and complex supply chain. That’s how the commodity market works for any industry.”

Exacerbating our specific challenges is that nobody keeps inventory — not the suppliers or pharmaceutical manufacturers, the middlemen, the wholesalers, the health systems, or the individual hospitals. “When something goes wrong, there’s no inventory to get through that period when the supply chain needs to recover. Immediately, there’s a shortage. This has been documented: You can predict that each time the shortage will persist about a year. Suppliers then see the shortages, re-enter the market charging higher prices, and you repeat the cycle: Competition slowly comes in, prices are driven back down, people exit, and another shortage happens. One of the best predictors of the risk of a shortage is whether a drug has been on shortage previously. Again, you would see this in any other commodity market; it’s just so much more critical when it happens to drugs.”

Enter the fray — finally — a Civica. Or any entity with a plan to tame this economic sine wave for generic drugs. I circle back to Civica’s initial funding stream to understand how this new market entry will operate. First, VanTrieste corrects me: He doesn’t categorize member organizations as investors. Rather, they are the end users — the hospitals and healthcare systems “buying inclusion into this new supply chain.” They enter at three levels based on up-front “contributions.” No matter the level, VanTrieste emphasizes, all members receive the same access and pay the same price for the drugs Civica brings to market.

Governing members participate on Civica’s board of directors; these are organizations that have contributed $10 million — $1 million is considered a one-time membership fee, and a $9 million line of credit. The Founding members add $5 million ($1 million membership fee, $4 million line of credit) and participate on Civica’s Drug Selection Committee and Medical Trends Committee. Third are partnering members, “open to any health system, large or small.” Civica charges $300 per “licensed bed,” capped at $1 million. “Even a small community hospital can afford this. And, frankly, if it’s an institution that can’t afford the membership, our board has the privilege to waive that membership,” VanTrieste says with a tinge of pride, knowing these smaller hospitals suffer the worst during shortages for lack of leverage with suppliers.

"We will sell the drug to the wholesaler for the exact same price we sell it to everyone else, and that price will be fully transparent to everyone."

In recompense, all members receive what is akin to an insurance policy: peace of mind there will not be drug shortages or price gouging. Civica can offer that guarantee, VanTrieste says, because the supply chains will include redundant manufacturing and strategic safety stock. “If something does go bump in the night, we have two suppliers, and if something goes really bad, we always have six months of inventory to weather the storm.” Additionally, members opting to procure the entire “bundle” of 14 products Civica plans to bring to market this year are targeted to receive savings of between 35 and 50 percent on current pricing, “and that’s in perpetuity,” VanTrieste adds. “Some of those products include sterile injectables often in short supply, such as antibiotics, anesthesia medications, pain medications, and nutrients/electrolytes often used as part of surgeries or other critical care treatments. The company announced its first two products in May, vancomycin hydrochloride and daptomycin, to be available this autumn. These antibiotics fight drug-resistant bugs. Vancomycin has suffered shortages since 2002, and daptomycin more recently. Xellia Pharmaceuticals will manufacture Civica’s supply of these drugs in its U.S. facilities.

This all sounds wonderful, but there’s the minor detail of actually getting these generic drugs manufactured at all; few players want to supply them for a reason. And while Civica operates on a not-for-profit basis, potential suppliers do not. Civica needs at least enough revenue to pay the CDMOs and other suppliers a competitive rate for capacity and production — and stay afloat as an organization. VanTrieste is confident Civica can pull it off. “Remember, customers save on the aggregate purchase of the bundle. We can make pricing work for everyone. For example, isoproterenol, a simple injectable product in a 2ml vial, is easy to make, but because a generic manufacturer has created an artificial monopoly, the average price today is about $1,400 a vial. It got as high as $2,200 a vial! Clearly, we’re going to knock that price right out of the ballpark. I’ve already had smaller health systems run numbers on the pricing of our first tier of products. They paid $380,000 to become a member; in the first year they will save $400,000.” (Again, we’ll follow up in more detail in part two regarding the relationships with manufacturers.)

Let’s turn to product distribution. Civica will ship as much product as possible directly from manufacturer to location of use. This, to many ears, is a holy grail for our convoluted healthcare system — no middle organizations in the distribution path piling on costs. However, VanTrieste says, if a healthcare system should want to go through a wholesaler for some specific convenience offered, that’s fine. “But be clear,” he warns, “we will sell the drug to the wholesaler for the exact same price we sell it to everyone else, and that price will be fully transparent to everyone. So, if the drug comes out of that other supply chain partner at a higher price, the health system knows exactly what that middleman charged. We force transparency through the system. The payer gets to decide whether that extra cost is, in fact, worth the convenience.”

Regarding the critical considerations of quality and reliability — even national security when it comes to the availability of certain drugs — VanTrieste will force that transparency down through the entire distribution and manufacturing channel. “We will be transparent on country of origin, including where the API is made, so not only do you know the country, you’ll know the manufacturing location right down to the specific plant of manufacture.”

VanTrieste closes here with this: “Our members provide us long-term, guaranteed contracts for the particular products we bring to market. Those are five-, seven-, or 10-year contracts, and they guarantee half of their volume comes from Civica. I make clear we only want half the volume: We are operating in a free market. We want to encourage competition and have others involved. We do not want to be the problem we’re trying to solve.”

MODEL FOR THE INDUSTRY

Could a Pfizer, an Amgen — name your drug company — copy this model (and add an element of profitability) should Civica go on to sustainable success? VanTrieste thinks so. In fact, that’s a motive for his coming out of retirement and dedicating himself to this adventure.

“I’ve been in the business for a long time. When I started my career 35 years ago at Abbott, they did direct distribution to not only hospitals, but also the community and the mom-and-pop pharmacies. So to me, direct distribution is something the pharma industry was once and can again be successful at. They all used to all do it. I am a pharmacist; I used to work in a mom-and-pop pharmacy in the evenings. I’d get UPS shipments directly from the manufacturer. These manufacturers are here today. They’ve been successful with a direct shipping model. I think you will see more companies starting to do that again. I believe the marketplace can correct itself. Our showing people how to accomplish that will be rewarding.”

An end to chronic generics shortages. Fair, transparent, and competitive pricing. Clear tracing of drugs and materials from country of origin, down to specific locations of processing and manufacture. Knocking out a bloated middle in a convoluted drug supply chain that hinders hospitals and harms patients. Creative capitalism and free markets may yet deliver us from challenges in this sector of our ailing healthcare system — and demonstrate a path for others to follow as well. 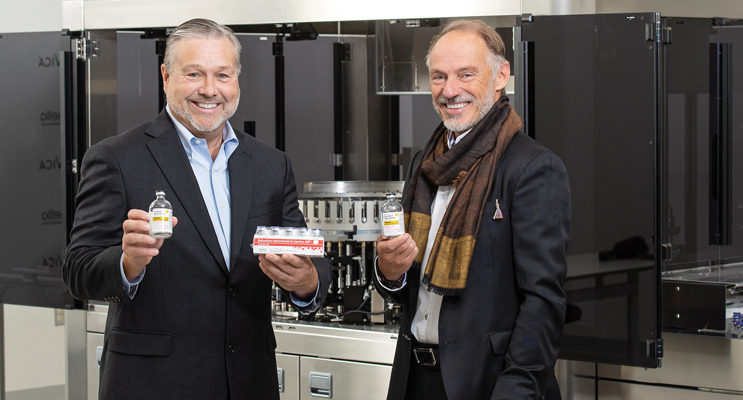 CIVICA RX ACHIEVED A KEY MILESTONE on May 15, 2019, when it announced that Xellia Pharmaceuticals of Copenhagen, Denmark, is its first supplier partner. Xellia, which last year established a commercial organization near Chicago and also has a manufacturing facility in Cleveland, OH, will provide Civica with the antibiotics vancomycin and daptomycin. Xellia will make medications for Civica under Xellia’s Abbreviated New Drug Application (ANDA) and Civica labeling and New Drug Code (NDC).