An All-Outsourcing Model For Orphan Drugs 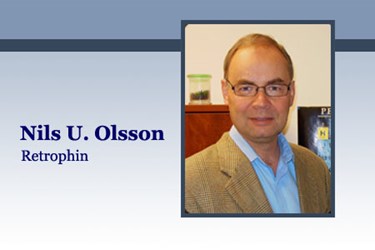 Nils U. Olsson, whose career has led him from Stockholm to San Diego, where this year’s first of two Outsourced Pharma West Conferences will be held, is about the best person to talk to on outsourcing in the bio/pharma industry today. He’s responsible for outsourcing all of his company’s discovery, development and manufacturing, including three commercial products. “Retrophin is one-hundred percent virtual,” says Olsson. “We don’t even own a pH meter.”

What Retrophin Inc. (NASDAQ: RTRX) does own is a business strategy tightly linking orphan disease markets to an outsourcing model. According to Olsson, who is VP of Chemistry, Manufacturing and Controls, focusing on orphan diseases allows for a perfect application of an all-outsourcing strategy. “Our virtual model works extremely well for these types of diseases and products. Outsourcing manufacturing particularly is a very logical step, because by definition campaigns are relatively small and need to be appropriately scaled.”

A New Era Of Profitability

Retrophin’s sales increased to $17.3 million in the first quarter of this year. This is particularly important because until recently – and still in the minds of many at Big Pharma – patient populations for orphan diseases have been thought too small to make them profitable business targets. What’s different now?

First, drug companies have direct and increased access to patients. “Today, we have a number of ways to work with patient advocacy groups and get close to the patient. These networks are beneficial to the development of new treatments,” says Olsson. “Frankly, there is just more public and private focus on helping these patients.”

Another contributing factor is what appears a broader application of FDA Fast Track designation, which potentially speeds up the time – and lowers the costs – of drug approval. Fast Track designation was recently granted for Retrophin’s RE-024, a novel investigational phosphopantothenate replacement therapy for the treatment of pantothenate kinase-associated neurodegeneration (PKAN). “It’s being recognized that orphan diseases are viable markets and a good business for some biopharma,” says Olsson. “That’s what Retrophin is in the process of proving.”

Olsson believes new biopharma companies need to find a market niche. “It’s hard to come in and compete with a Pfizer, Merck, Novartis or Sanofi,” he says. Retrophin was founded on this idea of targeting rare disorders. It started by identifying these niche opportunities, and then accomplished what had been more difficult in the past with such a business plan: It organized adequate financing to allow the enterprise to confidently move forward. “With the feeling  in the industry that blockbuster drugs are becoming rarer, true or not, people are finding ways to make the finances work in order to tap these markets with unmet medical needs,” says Olsson.

While Olsson feels his company is leading the way, he has watched others with similar models.  “I’m Swedish, and have therefore been keeping an eye on a company called Swedish Orphan Biovitrum AB (SOBI). It has been somewhat successful operating in this space,” he says

How To Do It With Outsourcing

Olsson moved from an environment where he had all the resources for drug development in-house at Sangart, Inc., to his current all-outsourcing model. Nonetheless, he quickly latched on to some key components to become successful in his new role.

“Most important is establishing a personal connection with counterparts at the CRO or CMO,” he says. “You have to meet early and invest a fair amount of resources upfront in terms of travel and time. It doesn’t matter much to me where a CMO is located; for example, we are in all four corners of the world with our manufacturing operations. But whether it’s early biological testing, API, or drug product, we go out early in the project startup phase to make sure we know them and that they know us.” He adds, “Projects don’t always go 100% according to plan. When times get tough, if you have more of a friendship type of relationship with a partner, it seems to help to solve any potential issues that come along.”

So Olsson likes to stay at the service providers he has built relations with? “If they perform well,” he says with a laugh. “Sometimes the strategy may not work out, and there is a benefit to not having all your eggs in one basket. We have good relationships with most of the big players and several of the smaller ones. How well they have performed in the past is an important factor. And are they fun to work with. If not, frankly, what is the interest in working with them so closely?”

The biggest challenge for Olsson and his manufacturing team is when his company in-licenses a product that has been at the same service provider throughout its lifecycle. He says some CMOs develop an ownership mentality that makes it difficult to get all the information he needs. “Even though the product now belongs to us, there is a certain unwillingness to share at the CMO. They feel it’s their product, and we get into a game of 20 Questions: You have to ask a specific question and then you finally get the information. It’s not a ‘collaborative asset’ like I am trying to set up when we bring work to a new organization.”

Earlier we said Olsson is a perfect person to talk to about outsourcing. He’s also a perfect panelist to have at a conference like Outsourced Pharma West. He earned degrees from Stockholm University (BS chemistry; PhD analytical chemistry) and did a 3-year post-doc fellowship at the NIH. He’s worked at start-ups and pharma alike (including Alliance Pharmaceuticals and Elan Pharmaceuticals), filling various chemistry, regulatory and quality positions. He harbors an understanding of how an all-outsourcing model can work for a company focused on the orphan drug market, and that includes staying current.

“The Outsourced Pharma West conference fits me hand-in-glove,” says Olsson. “It’s important to exchange information with other biopharma companies because Retrophin in-licenses products at all stages of the drug development continuum. And I always need up-to-date knowledge of which CMOs have at least the theoretical capabilities of handling certain production processes that I might have a sudden need for.”

Olsson and his team have logged the miles, from San Diego to Europe, China and the South Pacific, in an effort to learn who the players are. “Even if you know most of the CROs and CMOs, there is always someone new to discover,” he says. “I consider it as making new friends to help Retrophin bring new drugs and treatments to patients with diseases that offer limited or no options.”