A Star Is Born To Deliver Drugs: Can It Be Outsourced? 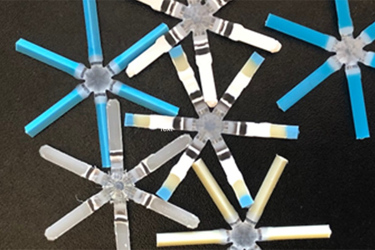 A miniature manmade “star” – with a round middle and triangular-shaped arms – collapses to neatly fit into a capsule and provide a long-acting oral drug, the most advanced of which has completed phase-two clinical trials (LYN-005: oral weekly risperidone).

The creators of this device-like drug – the FDA says it’s a drug – are devoted to manufacture at scale, through automated and continuous manufacturing.

To help accomplish this, along with planned growth in internal manufacturing, outsourcing partners will be utilized.

The “star” represents Lyndra Therapeutic’s LYNX™ drug delivery platform, enabled by some “50 patented innovations in design, engineering and materials science,” which allows virtually any daily or frequently ingested oral therapy to be delivered as weekly or monthly pills.

“This is our ‘dosage form,’” says Ray Knox, Chief Manufacturing Officer, proudly holding between thumb and forefinger a “stellate” – as he refers to it from the Latin for “star” – during a recent conversation.

“We purchase the raw API, polymers, and excipients, and extrude them together to effectively create the components of the arms,” he explains. “The only part we currently outsource is the centerpiece, a complicated over-molded component.” [‘Over mold’ suggests a multi-step, injection-molding process where components are molded atop each other.]

The API that becomes the arms of a stellate are for drugs “already or close to becoming commercially available from a generic perspective,” Knox explains.

“We looked at a fully outsourced approach, but because some of what we are doing is unique, and crossed the worlds of med-tech and pharma, we felt it better staying internal on our first production lines, and thinking about how to make the process into a modular, continuous operation to then outsource for our global market access.”

Pursuing a 505(b)(2) regulatory pathway for its lead asset (oral weekly risperidone for schizophrenia), Lyndra is attempting to demonstrate the drug delivered via this new technology elutes in the stomach over a period of time matching the target window of a standard oral-dosage form.

“However, unlike that standard [immediate release] form, with a spike at the beginning and drop off over a number of hours, we aim at a steady state, which then dwindles slowly over a target timeframe, typically seven or more days.”

Lyndra has found two service providers who can lay a “skeleton structure” over which is molded an elastomeric material – material exhibiting elastic or rubber-like properties – enabling the star-structured drug form to be folded and capsulized.

Knox says those partners are CDMOs well known as injection molding companies. At this stage, they are more recognizable in the med-device world than the pharma world, but both are involved in producing drug-combo devices.

“There are an incredible number of injection-mold houses, but in our earliest days, none were that interested in our program,” recalls Knox.

Besides the novelty, “the volume wasn't there,” although, he adds, “most all of those large companies now have a model to bring in early development work.”

Also, conversations with a variety of CDMOs led to two specific areas of concern.

If Lyndra went to a “purely pharma-type CDMO,” the specialty would be outside of their known skillset. In most cases, those CDMOs would have to bring in and establish new and requisite equipment.

On the other hand, says Knox, when Lyndra investigated partners on the med-device side, while the experience with combination products was there, “our product is a drug product. We found their infrastructure a bit lacking from a quality-system perspective.”

So while the future still held forth for a more robust outsourcing model, Lyndra set to designing the production line and parameters internally.

Lyndra’s CEO, Patricia Hurter, who earlier in her career was instrumental in getting the first continuous manufacturing line up and approved at Vertex, led the charge to create an integrated, continuous processing line for its first products.

Knox says Lyndra's line is conceived in a “modular fashion, whereby we can effectively bring an equipment chain together that we can, so to speak, ‘reprint and redo’ to take as a model wherever in the world we want to manufacture product.”

That continuous production "line” started out with manually placed materials on hot plates manually inserted into ovens. Some small components of the star’s inner circle required scientists handle them with tweezers.

“Altogether, it probably took us three to four years to realize, in a stepwise approach, how to convert all this to at first a semi-automated process we were confident we could fully automate in the future,” says Knox.

“And now we're at the stage of commissioning that equipment to be a continuous and advanced manufacturing platform.”

“Lyndra worked with some OEM suppliers of equipment on proof of principle. We started with adapting and experimenting with what would've been off-the-shelf equipment.

“Once we realized we had a principle that might work, we had a smart group of engineers actually try and take that benchtop, and do early design work with that equipment, and subsequently go to OEM manufacturers. We’d say, 'Here’s our basic concept to leverage your skillsets for turning this into a semi-automated process.' We’d then have them make equipment which we’d bring internal for qualification.”

I ask Knox how confident he is that when commercial success is at hand, there will in fact be partners willing to adopt, qualify, and devote space to Lyndra’s specialized continuous production line – and working with those unique combination materials.

“We’ve got two or three organizations absolutely chomping at the bit to try and do it,” he replies.

And that’s positive news on a number of fronts.

Despite its unique elements, Lyndra presents an intriguing case study on development, manufacturing, and outsourcing challenges, some of which readers may find familiar and overlapping:

We’ll look more closely at that last component next.