What Can We Learn From Compounding Pharmacies Producing Small Parenteral Batches? 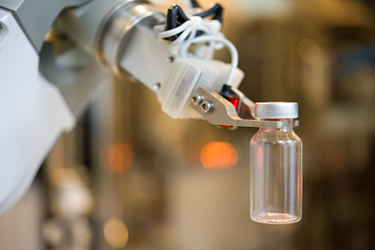 A previous version of USP <797> is in fact already effective. This required compounding pharmacies to move their laminar flow hoods out of the main pharmacy rooms, where there was interfering activity, and into their own rooms where particulate generators such as cardboard could be eliminated and gowning could take place. USP <800> becomes effective in the fourth quarter of 2019 and, unlike most USP chapters that focus on product quality and patient safety, it is intended to safeguard personnel who manipulate or interact with hazardous drugs.

And still another problem is errors in compounding. A 2017 study showed a 2.3 percent error rate in manual compounding, occurring mostly at reconstitution or at the dose draw step of compounding.1

Some compounding pharmacies have hit on an idea that helps address these challenges — robots. Robots are used in a variety of industries, the most notable of which is the automotive industry. But if robots could be the solution to many of the problems described, why aren’t they more accepted and used? Like many things in life, it is determined by perceptions. There are perceptions that robots are expensive, that they are difficult to program, and that they are difficult to clean and to sanitize/sterilize.

Using the concepts of quality risk management (QRM), this article examines the potential benefits of, and perceived obstacles to, the use of robots in compounding pharmacies by looking at general models that are commercially available and presents the experience of two hospitals using robots for compounding.

Robots can eliminate the greatest risk of contamination of the sterile product, which comes from the human compounder. In addition, robots can reduce the risk of errors in dosing of the components during compounding. It would be appropriate to consider a robot where the preparation of the sterile product can be anticipated. Early adopters of robots occurred with 503B compounding pharmacies, where hospitals placed orders for piggyback medications that were listed in their formulary or controlled by protocols. Many of these were narcotic products. For this type of compounding, a supply of components such as, for instance, 150 mL D5W bags, syringes, and morphine sulfate solution in a vial(s), is provided to the robot. Components are scanned for their bar codes to confirm the correct drug, and then dosing is confirmed and recorded, gravimetrically, improving accuracy.

Further advances in robotics and programming have allowed some hospitals, usually teaching institutions, to have the robot prepare a variety of compounded products, where the components for each product are loaded into a “cassette” for the robot to assemble. Compounding by robots is somewhat slower than manual compounding, but the robot can be loaded at the end of the day shift and allowed to operate unattended overnight. Robots should be bought as integrated systems with their respective isolator, and not installed into an existing isolator.

Duke University Hospital has two robots (named Elvis and Ivana). The hospital reports that it saved $167,000 from October through May that would have been spent on purchasing premixed piggyback bags from a 503B compounding pharmacy (mostly varying doses of piperacillin and tazobactam) for pediatric patients. Its current annual spending on premixed products exceeds $1.6 million. The robots also enhanced the accuracy of the compounded sterile preparations. The units meet the requirements of USP <800> to protect the compounding pharmacists/technicians from hazardous drugs, which are usually oncologics.

The Children’s Hospital of Philadelphia (CHOP) uses three RIVA robot systems. In its application, the robots tie into the electronic patient records and download prescription orders. After confirmation by a pharmacist, a technician loads the components into a cassette. Interchangeable racks on a carousel can switch from producing piggyback bags to compounded syringes in 15 minutes. The RIVA prints and applies labels to the completed compounded items. The airflow in the isolator is 675 changes/hour, easily meeting Class 5 conditions, and a UV disinfection system is used.

It is important to point out that the cost of a robot is not simply the purchase price but the total installed price, including programming and a maintenance contract, which can be significantly higher than the purchase price. Any construction or renovation needed can be complicated by the physical constraints of aging facilities. It is likely that the robot(s) will not be able to perform all compounding, especially “stat” orders, and manual compounding facilities will still be needed. Above all, it is important to remember that whatever the cost, if it could prevent a serious compounding error, what is the price of that human life saved?

Will a robot solve all the problems? Likely not. Not all drug product containers have a bar code that the robot can read to confirm the correct dose. But for issues such as selection of the right robot, facility modifications to conform to the robot and comply with USP (and JACHO) requirements, and qualification and validation, having a qualified and experienced consultant can avoid problems and delays in bringing your compounding into the 21st century.

But wait! Is there more we can learn from compounding pharmacies? Let’s take a short history lesson. When I was working at McNeil Laboratories, the Tylenol crisis occurred. During our response to the crisis, I was introduced to the Chinese word for crisis, which consists of two Chinese characters, one for danger and the other for opportunity. That same breakout, danger and opportunity, applies to the challenges that compounding pharmacies have for pharmaceutical companies. Here are two stories of products that occurred long before attention was focused on compounding pharmacies following the New England Compounding Center issue.

The second story involves a blood pressure medication called Loniten. A curious side effect of this product, owing to its mechanism of action including vasodilation, was hair growth. Again, in response to prescriptions written by physicians, pharmacists crushed Loniten tablets to create a topical solution to be applied to the scalp. The company that made Loniten recognized the opportunity and responded with what turned out to be a very successful product for it, Rogaine.

Right now, there are hospitals across the United States struggling with choices in how to provide compounded intravenous (IV) solutions and piggybacks (small IV solutions containing antibiotics or narcotics). Do they buy robots? Do they install isolators and hire and train more staff? Do they contract out production to a nearby 503B compounding pharmacy? Does the pharmaceutical industry want to sit on the sidelines while its products are being manipulated and modified — a danger? Or does the pharmaceutical industry want to provide its products in a manner or with the tools that will enable compounding pharmacies to succeed in delivering a safe and effective drug to the patient — an opportunity?

This article was adapted from a presentation given by the author at the PDA/FDA Joint Regulatory Conference on Sept. 17, 2019.

Chris Smalley recently retired from Merck, where he had responsibility for innovative implementation and validation, including single-use systems, globally. Previously, he was director of quality operations for Wyeth Pharmaceuticals for 12 years, with responsibility for setting validation standards and validation activities globally. His research experience includes responsibility for quality in the U.S. operations of the Sanofi Research Division, and earlier he worked for the Johnson & Johnson family of companies, where he was a plant manager. Smalley is a graduate of the Philadelphia College of Pharmacy of the University of the Sciences in Philadelphia. His graduate education includes an MBA from Temple University’s Fox School of Business and an MS in pharmaceutical chemistry from Temple University School of Pharmacy.