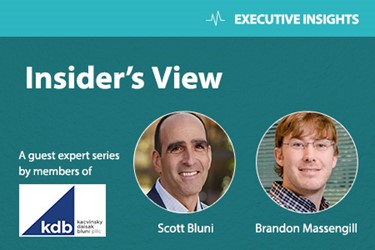 In recent years, patents that cover medical diagnostic methods have been closely scrutinized by U.S. courts. The current test for examining the patentability of such methods, in accordance with recent Supreme Court cases, involves a two-step process.

The first step is to determine whether the patent is directed to “natural law,” such as natural phenomenon; if so, the second step is to determine whether any element or combination of elements in the patent is sufficient to ensure that it amounts to something significantly more than that natural law. Any patent claim failing this test will be deemed ineligible for patent protection.

The result has been the invalidation of patents claiming medical diagnostic methods that make use of commonly known laboratory and analytical techniques to diagnose naturally occurring physical phenomena, even where the diagnosis itself is novel.  Going forward, the success of medical diagnostic patents will depend upon the ability to claim innovative methods and practical applications, rather than the observation of biological or other physical effects using known techniques.

The issue of medical device method patent eligibility is well-exemplified by the case of Athena Diagnostics, Inc. v. Mayo Collaborative Services, in which a medical diagnostic patent was found to be invalid for claiming a patent-ineligible law of nature. The Athena case has a tortured court procedural history that most recently includes a denial by the Court of Appeals for the Federal Circuit (which has exclusive appellate jurisdiction over patent matters) – in eight separate court opinions – to rehear Athena’s initial appeal of the court ruling.

The four concurring opinions and four dissenting opinions issued on July 3, 2019, are indicative of the uncertainties and difficulties faced by courts when deciding what constitutes patent-eligible subject matter in the area of medical diagnostic methods.

The basics of the Athena case are as follows. Athena filed a patent infringement complaint against Mayo based upon its U.S. Patent No. 7,267,820 (the “‘820 Patent”). The ‘820 Patent resulted from the discovery that certain patients suffering from the neurological disorder myasthenia gravis (MG) generate autoantibodies to a membrane protein called MuSK. The inventors discovered this association and patented a corresponding method for diagnosing patients. Simplifying it into basic elements, the ‘820 Patent claims the following method:

Mayo moved to dismiss Athena’s complaint, arguing that the asserted claims are invalid under 35 U.S.C. §101 as being directed to subject matter that is ineligible for patent protection: namely, a law of nature.  The District Court agreed with Mayo, and Athena appealed to the Federal Circuit.

Following the Supreme Court’s jurisprudence articulated in Alice Corp. v. CLS Bank Int’l and Mayo Collaborative Services v. Prometheus Laboratories, the Federal Circuit applied a two-part test to assess validity of claims allegedly directed to laws of nature: (1) whether the claims are indeed directed to a law of nature, and if so, (2) whether the limitations of the claim apart from the law of nature, considered individually and as an ordered combination, transform the nature of the claim into a patent-eligible application as amounting to something significantly more than a patent of the natural law itself.

Addressing the first inquiry, the Court found the claims to be directed to a natural law: the correlation between the presence of naturally-occurring MuSK autoantibodies in a bodily fluid and MuSK-related disorders such as MG. Athena argued that the claims are directed to an innovative laboratory technique rather than a natural law, but the Court disagreed because the claimed process steps are based upon routine laboratory methods. Indeed, Athena’s only admitted innovation was the discovery of the link between MuSK autoantibodies and certain disorders such as MG.

Athena also argued that the claims would not preempt any natural law because of the specificity of the claimed process steps. Importantly, the Court noted that “[p]reemption is sufficient to render a claim ineligible …, but it is not necessary.”

Having found the claims to be directed to a natural law, the Court turned to the second inquiry, finding the claim steps not drawn to the natural law to require only standard techniques to be applied in a standard way.

“Because the specification defines the individual immunoprecipitation and iodination steps and the overall radioimmunoassay as conventional techniques, the claims fail to provide an inventive concept,” stated the Court’s opinion. In so holding, the Court rejected Athena’s arguments that the claimed steps amounted to significantly more than the natural law because they had not been previously applied to detect MuSK autoantibodies and, further, that they made use of a man-made molecule (i.e., labeled MuSK).

Individually and collectively, the claimed steps were found not to represent an inventive application beyond the discovery of the natural law itself because they were each known, conventional techniques.

Following its loss at the appellate level, Athena petitioned the Federal Circuit for a rehearing by its full panel of judges. The Court denied Athena’s petition in eight separate opinions that provide myriad views on the patent laws as applied to medical diagnostic methods, but uniformly request intervention from the Supreme Court or Congress to clarify the issue.

Guidance From The USPTO

Earlier this year, recognizing the uncertainties confronted by various industries affected by patent eligibility case law developments, the United States Patent and Trademark Office (USPTO) published revised examination guidelines in an effort to improve consistency in the examination of patent claims under §101.

The guidelines provide a two-prong analysis to determine whether to apply the Alice/Mayo test described above: (1) determining if the claim recites any of the so-called “judicial exceptions” to patent eligibility, [i.e., laws of nature, natural phenomena, and abstract ideas] and, if so,  (2) determining if additional claim elements integrate the judicial exception into a practical application.

If the judicial exception is integrated into a practical application, then the claim is deemed patent eligible without further analysis; if not, then the patent examiner must continue the analysis under the second step of the Alice/Mayo test.

The USPTO guidelines appear to be consistent with Athena. One may consider the use of conventional techniques to observe a natural law, as provided in Athena, as not improving a technical field and only sufficient to generally link a judicial exception to a particular technological environment. Additionally, or alternatively, conventional techniques to observe a judicial exception may be considered insignificant extra-solution activity.

Inventors should be aware of this potential pitfall, and plan accordingly. For example, inventors should be thoughtful about including descriptions in their patents detailing how their inventions improve one or more technical fields, and how they are specifically linked to a particular technological environment.

Until this area of unsettled law is more fully developed, it will be important to include such practical implication details in medical diagnostic patents to maximize the flexibility to claim inventions in multiple ways, thereby maximizing the likelihood that at least some of those claims will withstand future scrutiny in the courts.

Scott Bluni is a Senior Principal at KDB, a national IP law boutique. Throughout his career, Scott has held senior law firm and in-house positions, providing clients and colleagues with a strategic and trusted perspective on intellectual property law. Prior to joining KDB in 2014 as a name partner, Scott was a partner and co-chair of the intellectual property group at Bingham McCutchen. Scott started his legal career as a patent examiner at the USPTO.

Brandon Massengill is a Senior Associate at KDB. Brandon specializes in the preparation and prosecution of patent applications before the USPTO. Brandon’s previous experience with multiple companies in the intellectual property field, including university technology transfer, corporate intellectual property management, and small business technology development, has granted him a deep understanding of both the technological and business aspect of IP. Brandon earned his Juris Doctorate and MBA from Campbell University School of Law. He also holds bachelor’s degrees in both civil and electrical engineering from North Carolina State University.