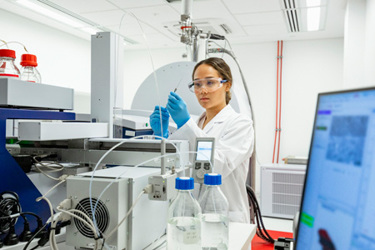 Spectroscopic methods have increasingly been gaining acceptance in the biopharmaceutical industry over the last years. This is partly due to technological advancements, which make integration into the process stream easier, but also intrinsic features that make them attractive as a PAT tool. These attributes include (i) their non-invasive nature, (ii) their capability of real-time monitoring, (iii) the absence of sampling, and (iv) the simultaneous measurement of several analytes.

Important process parameters such as nutrients, metabolites, and product titer can be quantified during bioprocess monitoring based on spectroscopical methods applied. In combination with multivariate methods this can effectively be utilized for advanced bioprocess monitoring and control. Therefore, Raman and MIR spectroscopy were studied to reveal their ability of monitoring mammalian cell cultures. As both techniques measure in the molecules’ so-called fingerprint region, they can detect similar analytes, but with differing sensitivities. Therefore, a direct comparison between the two technologies was conducted to investigate which system is more suitable for analyzing mammalian cell culture(s).

Overall, this study created several robust models for a range of important process parameters, such as nutrients, metabolites and target protein titers.