Calculating The Process Capabilities Of Cleaning Processes: A Primer 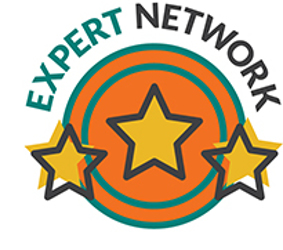 Part of the Cleaning Validation for the 21st Century series 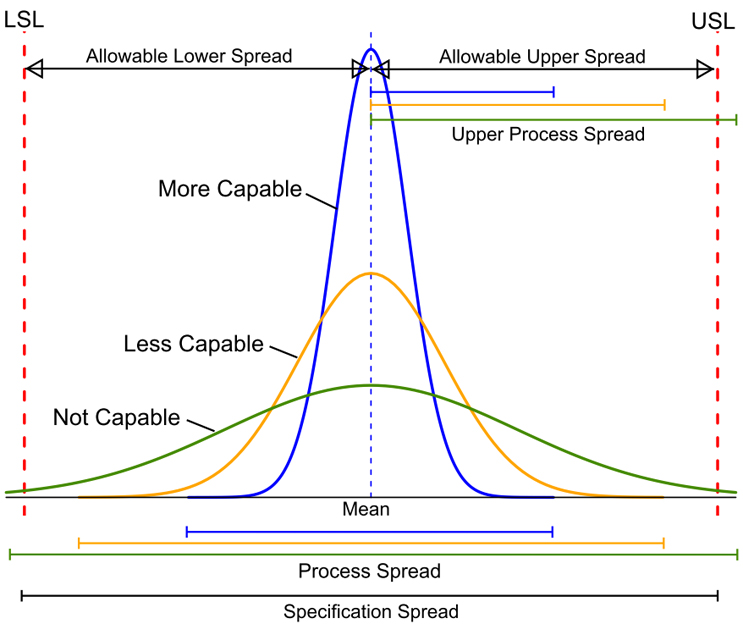 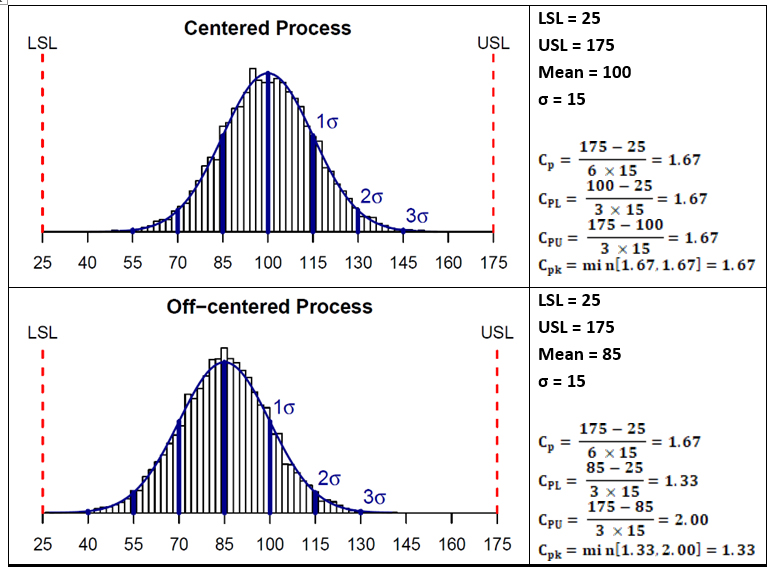 As seen from the formulas above, calculating these process capability indices (PCIs) is simple and straightforward. However, it should be noted that these calculations are based on the assumptions that the process data are normally (or approximately normally) distributed and that the process is stable (the absence of significant trends such as drifts and/or stationarity).

For cases where the process data is not normally distributed or may not be expected to be (e.g., swab results obtained from different locations during a cleaning qualification/verification run where the collection of samples is not done in a particular sequence or order), a different set of indices, known as process performance indices (PPIs), are used for comparing process data to specification limits. These indices, denoted by PP, PPK PPL, and PPU, are used in place of CP, CPK CPL, and CPU respectively, to measure compliance to specifications using a detrended estimation of sigma. The formulas for calculating these indices are the same as the ones used for calculating PCIs, the only difference being the type of standard deviation used. In estimating PCIs, group or short-term standard deviation (the one estimated using control charts) is used, whereas overall or long-term standard deviation (i.e., the standard deviation of all the values) is used when estimating PPIs.5 Similarly, when the process data are not normally distributed (e.g., microbial data), different formulas that are based on percentiles of the fitted or empirical distribution are used for calculating PCIs or PPIs. These modified indices are interpreted the same way as the standard PCIs discussed earlier. For ease of understanding, only the notations used for standard PCIs will be used in this article.

In Six Sigma or Operational Excellence programs, the values generated by these process capability calculations are considered critical in interpreting how acceptable a process is. The guidelines that are widely used for these values are shown in Table 2.

The goal of these so-called "Six Sigma" programs has been to develop or improve manufacturing processes such that they have an additional three standard deviations (sigma) of room on both sides of their process data, which mathematically calculates to a Cp of 2.0. It should be noted that, in practice, many companies have been satisfied just to reach Five Sigma (Cp = 1.66) and feel that striving for Six Sigma (Cp =2.0) is not worth the extra cost and effort. Achieving a process capability of 1.66 is considered very good.

As we have seen, process capability is an important process performance measure that is relatively simple to calculate, as it only requires the mean and standard deviation of data from the process and the specification limits for that process. So, in the case of a cleaning process, the process capability of the cleaning process can be calculated from the mean and standard deviation of the swab or rinse data from the cleaning process and the Health Based Exposure Limit (HBEL)-based cleaning limits for the swab or rinse data.

To determine process capability (Cpu) of a cleaning process, the terms in this equation can be substituted with the values estimated from cleaning (swab or rinse) data and the HBEL-based cleaning limit as shown in the example in Equation 5.

Statistical software such as Minitab, JMP, "R," and many others are capable of performing process capability analyses and graphing the results, such as the example report in Figure 4. 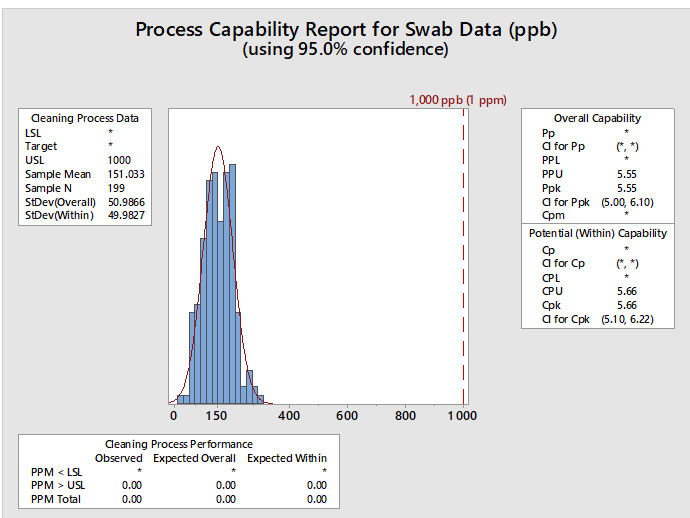 Figure 4: Example of Process Capability Analysis in Minitab for Hypothetical Swab Data - This graph shows the process capability of swab sample data (N=199) with a mean of 151 ppb and a standard deviation of 50 ppb. The hypothetical HBEL-based limit is 1,000 ppb or 1 ppm. The process capability is shown as the process performance upper (PPU) for the overall capability with a value of 5.55 and as process capability upper (CPU) for the potential (within) capability with a value of 5.66. Minitab provides the option of calculating confidence intervals for the process capability values since the mean, standard deviation, and N are all known. This option is especially useful when there is a small number of samples. The confidence intervals for the CPU are 5.10 and 6.22, meaning that based on the number of samples (N), the CPU could be as low as 5.10 or as high as 6.22. The graph also shows the number of observed and expected failures per million (PPM &GT USL) is 0.00.

Also, since process capability values are derived from the mean and standard deviation, upper and lower confidence intervals can be calculated for these process capability indices. In cases where there may be varying or small sample sizes (e.g., where N is typically < 25) it is prudent and recommended to report and use the lower confidence limit of the Cpu from these calculations instead of just the Cpu itself. Almost all statistical software in use today can provide confidence intervals for process capability values. Figure 4 shows an example using Minitab 17. In the textbox on the right, from the output from Minitab reports, the Cpu as 5.66 and additionally reports that the 95% confidence intervals (CI) for the Cpu range from 5.10 to 6.22. (Note: Minitab reports the CI for the Cpk, which is either the Cpu or the Cpl; in this case it is the Cpu.)

Minitab can also report the expected number of failures out of a million based on the process capability analysis. In this example, the lower textbox reports, based on these data, that there are 0.00 possible failures out of 1 million (i.e., exceeding the upper specification limit). This indicates that there is a very low probability of a cleaning failure in this example.

When using option 2, it is necessary to identify which of the many non-normal distribution models to use. Minitab has a test (Individual Distribution Identification) that can evaluate data against 12 different and common distributions. Based on these evaluations, the best-fitting distribution model can be selected.  For example, Figure 5 shows a graph generated by Minitab comparing four distributions (normal, lognormal, gamma, and exponential). The data set being analyzed is randomly generated data from a gamma distribution. The interpretation of the graphs is based on a visual examination of how well the data fall along the expected (red) line and whether the P-value of the Goodness of Fit Test for the distribution is greater than 0.05. The red line plots where the data should fall if they follow that particular distribution. If the data do not fall along the red line, then the data are unlikely to be from that distribution. If the data appear to follow the red line, the next criterion to check is the P-value. By convention, the P-value should be greater than 0.05, indicating there is at least a 1:20 chance that the data follow this distribution, and it is considered safe enough to analyze the data using this distribution. 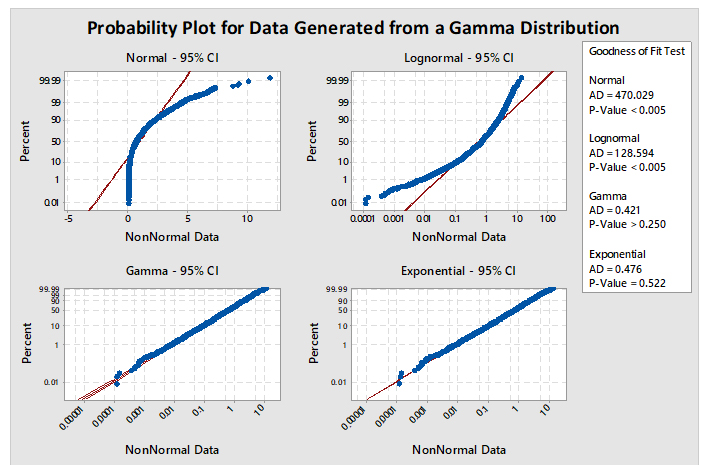 Figure 5: Individual Distribution Identification - This graph shows the evaluation of a data set of 10,000 random values generated from a gamma distribution. Minitab allows for testing the data against 12 distribution models and two transformations (Box-Cox and Johnson). The evaluation is performed both visually and statistically.

In Figure 5, the plots for the normal and lognormal distributions are clearly off their red lines and also have P-values of <0.005. Consequently, these distributions would be appropriately rejected as good models for analyzing these data. The gamma and exponential plots closely follow their red lines and appear very similar to each other. Examination of their P-values reveals the gamma to be 0.250 and exponential to be 0.522. Both distributions pass the criteria for selection. 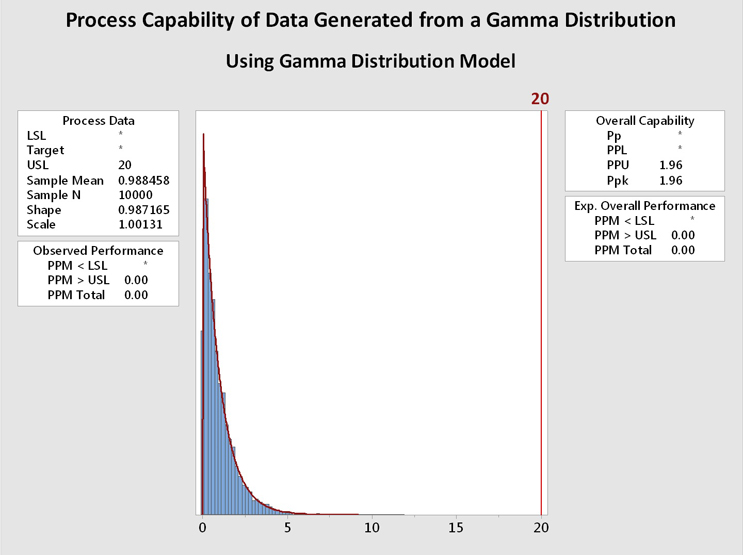 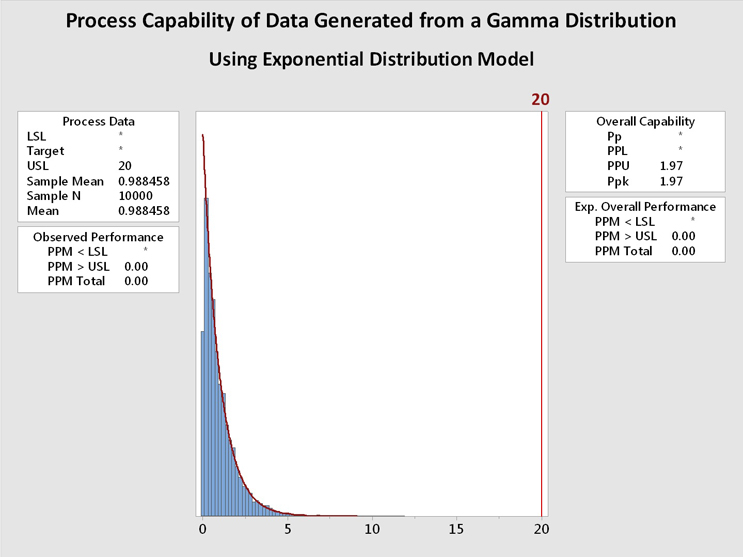 Similarly, when the underlying distribution of process data is unknown, a non-parametric (distribution-free) variant of Cpu calculated by empirical percentile method proposed by McCormack et al, can be used.8 The Cpu calculation using this method is shown in Equation 7. In the equation, P50 and P99.5 are the 50th (median) and 99.5th percentiles of the empirical distribution, respectively.

This approach can only be used when sample size is ≥100. A macro for calculating non-parametric capability indices based on McCormack’s approach is available on Minitab’s website.10

These modified indices are interpreted the same way as the standard Cpu discussed earlier. Examples of decision trees to identify the calculation method for Cpu are given in Appendices I and II.

"All Models Are Wrong, But Some Are Useful"

It may be surprising for some readers to realize, as we saw in Figure 5, that more than one distribution model may be used to analyze data instead of the "correct one." Actually, this is perfectly acceptable as, in truth, there is no "correct one" or "absolutely true" model. The quote starting this section is typically attributed to the statistician George E. P. Box, and this quote is considered famous, primarily among statisticians.

"Remember that all models are wrong; the practical question is how wrong do they have to be to not be useful."12

Box's comment is most relevant to this article since there are voices in the cleaning validation community claiming that process capability is not appropriate for cleaning or cannot be determined since cleaning data are non-normal or simply that statistics is unnecessary for cleaning. Consequently, there has been hesitancy to adopt these techniques out of fear that the analysis may be calculated incorrectly and serious errors made. However, comparisons of process capabilities calculated using multiple distributions have shown that such errors are minimal if an appropriate selection process has been followed.13 Appendices I and II offer two decision trees that can be followed to minimize errors in selecting models.

Decision Tree to Identify the Calculation Method for Cpu (Example 1) 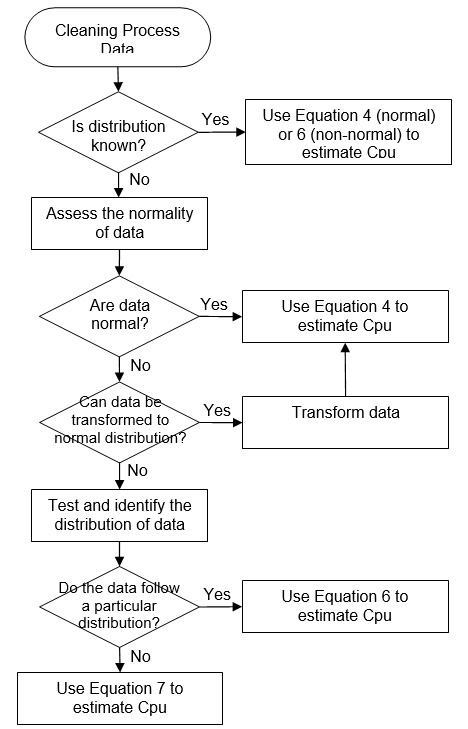 Decision Tree to Identify the Calculation Method for Cpu (Example 2) 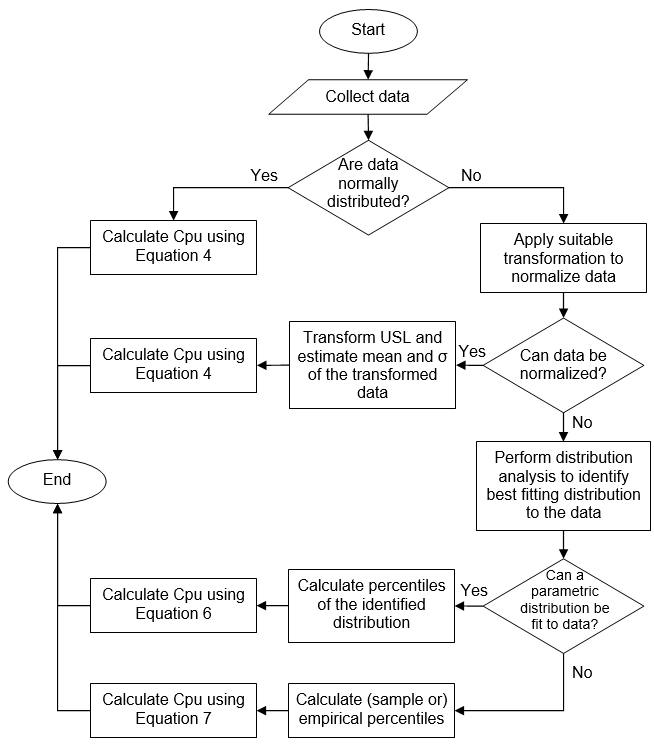