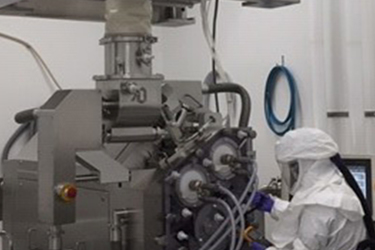 Amylyx Pharmaceuticals, an emerging biotech focused on developing new treatments for amyotrophic lateral sclerosis (ALS) and other neurodegenerative diseases, is joining the fight against ALS with its lead candidate, AMX-0035.1 AMX-0035 is a fixed dose coformulation of the small molecules sodium phenylbutyrate and taurursodiol optimized to simultaneously target pathways originating in the mitochondria and endoplasmic reticulum. The goal is to preserve motor neurons typically lost and/or degraded during the clinical decline of an ALS patient.

Amylyx partnered with Thermo Fisher Scientific to advance AMX-0035 from development to a commercializable product. As it approached the pivotal milestone of Phase 3 studies, there were development and manufacturing factors, such as the inherent complexity of combining an acid and a base, that Amylyx and Thermo Fisher had to consider for process development and scale-up of registration batches. Thermo Fisher’s stepwise approach to Quality by Design (QbD), an approach that drives consistent quality into manufacturing, became integral to the success of the AMX-0035 campaign.