If the activity happening in state legislatures across the country heralds change at the federal level — and it likely does — pharmaceutical manufacturers ought to buckle their seatbelts.

Since federal law is consistently modeled after state initiatives, understanding state activity is vital to anticipate the path on which the nation is headed. Consider, for example, surprise billing legislation. That issue has been taken up in 21 states that have surprise billing laws in force, but Congress is just now considering it.

The body of new state laws targeting drug pricing is unprecedented and the requirements are not uniform from state to state. This portends implications not only for compliance departments. These changes strike at the way manufacturers do business and should be understood at all levels of manufacturing. Bringing your company’s various silos together to address this avalanche of mandates is the best way to create a cohesive plan of action and get ahead of the curve. Below is a four-step strategic planning process to assist you in this endeavor.

Below is a map of the states with the most active legislatures during the 2017–2018 session in terms of legislation, executive orders, and ballot measures that were implemented. Begin by prioritizing the states that generate significant revenue, then identify the legal trends in those states that are most likely to impact your company’s bottom line. Are the bigger states of more concern? Are there more opportunities in certain states for certain therapies? What are the new bills to keep an eye on in the states you’ve identified? What is already in place? Narrowing the geographic region will make it easier to tackle more trends. 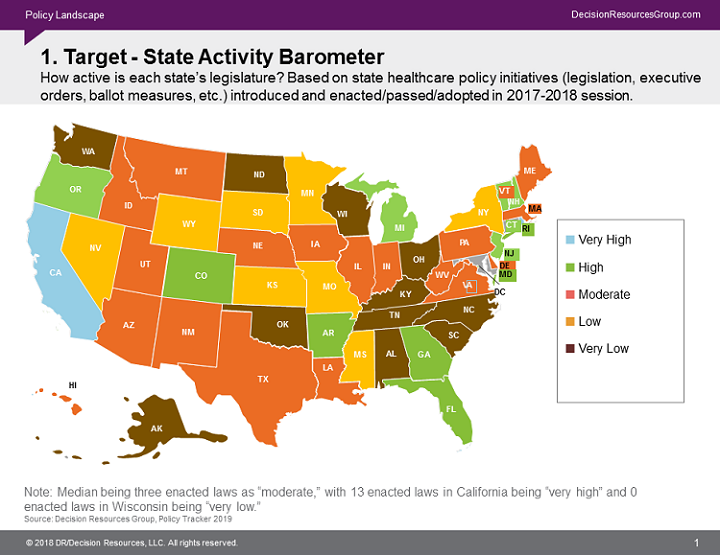 Second, get clarity about the initiatives in the states identified in step one. Understand the challenges posed by those bills. Ask questions of your company’s legal counsel or government affairs experts and have them explain anything that could potentially impact commercial functions. The goal is not to become a compliance expert, but to be thinking about how these laws may impact the company’s bottom line.

Take action by creating a cross-functional team to analyze the impact of regulations from a competitive headspace. Identify core project team leaders to analyze the impact of regulatory trends from a commercial headspace. Seek the support of senior executives to remove roadblocks and push toward shared goals. A multidisciplinary team that bridges boundaries will better address the nuances of each new regulatory trend.

Task the cross-functional team with determining how compliance will impact commercialization and work on a blueprint for pricing, transparency, and other business development strategies. The focus should be on strategizing for long-term profit generation, protection of trade secrets, and business development. Communications/marketing is important in blueprint strategizing as transparency plays a key role in compliance. Transparency laws focused on pharmaceutical manufacturing and pharmacy benefit managers (PBMs) are increasingly appearing nationwide and are unlikely to stop coming.

Steps 1 and 2: Which geographic regions and trends should be scrutinized?

An example of a significant trend that we are tracking at Decision Resources Group is regulations triggered by drug price increases. New reporting requirements are mandated when a drug price increases above a certain threshold. Essentially, manufacturers must give advance notice of a planned price increase and detailed justification for the decision to raise it. At least seven states have introduced these bills in 2019, and those introduced in Oregon (HB 2658) and Maine (LD 1162) have been enacted. Bills introduced in Hawaii, Illinois, Nebraska, and New Jersey are pending. A bill introduced in New Hampshire (HB 703) has failed. These bills follow along the trajectory of other states that have already enacted these laws in recent years, including California (SB 17; 2017), Vermont (SB 92; 2018), Oregon (HB 4005; 2018, limited to specialty drugs), Nevada (SB 539; 2017), and Connecticut (HB 5384; 2018).

Step 3: Which departments should be on a cross-functional team?

Using California’s existing law (SB 17), here are some considerations broken out by the departments impacted.

Step 4: How will compliance impact commercialization?

Here are some sample questions for a cross-function team looking at the regulations triggered by drug price increases.

To make informed market access decisions in the current political climate, manufacturers must have a full grasp of the myriad of new state regulatory trends emerging across the country.

Within the patchwork of new laws coming out at the state level, drug prices are attracting unprecedented scrutiny. The ramifications for manufacturers are twofold. First, compliance creates a costly new administrative burden. Second, long-term strategic implications must be considered. To assess long-term business priorities, we recommend that manufacturers institute cross-silo teams to digest legislative trends from a commercial perspective and create a blueprint for pricing and other business development strategies.

Stephanie Hoops is an attorney and authority on healthcare policy and regulatory issues. She joined Decision Resources Group (DRG) in 2015 and covers the California market. A former award-winning journalist in California, Alabama, and Texas, her work has appeared in Bloomberg, the National Law Journal, American Lawyer, The Boston Globe, San Francisco Chronicle, and The Detroit News.  Follow her on Twitter at @StephHoopsDRG.